About one in 10 voters could still be considered “volatile,” half the number as at this point in 2016, but this time around, most of them have an unfavorable opinion of Donald J. Trump. 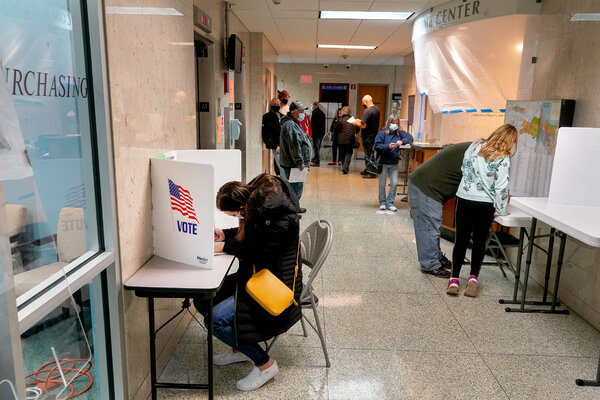 John Holland, 74, is proud to call himself a political independent, and he has always made a point of voting for the candidate he prefers, not a party to which he had sworn allegiance. In mid-October he told a New York Times/Siena College poll he wasn’t yet won over by either President Trump or Joseph R. Biden Jr.

Ultimately, Mr. Holland, a retired education-technology professional in Minnesota, did choose, and like many late-deciding voters, he said his choice emerged “from a values point of view.”

“I said, ‘Would I want President Trump to be the grandfather of any one of my grandchildren?’ And the answer was no,” he said this week, explaining that he had donned a mask and walked to an early polling site to cast a ballot for Mr. Biden.

Four years ago, voters like Mr. Holland — leery of both major-party candidates, undecided until the 11th hour and guided by their gut more than by policy — decided the election. This year, polling shows far fewer undecided voters remain, but in close battleground states they could still be pivotal.

And while voters who were negative on both major candidates in 2016 broke big for Mr. Trump as the “lesser of two evils,” particularly in the Midwest, they appear generally disinclined to do so again.

Among the most likely people to remain unconvinced of either major candidate are Latinos, Asian-Americans, young people and those with a history of voting for a third-party candidate. None of those groups have shown much warmth toward Mr. Trump over the past four years — but each of them has also given Mr. Biden trouble, from the primary campaign through today.

Combining data from Times/Siena polls of battlegrounds and the nation going back months, undecideds leaning toward Mr. Biden outweighed those leaning toward Mr. Trump, though not by an overwhelming margin. Perhaps more meaningfully, Mr. Biden had a slight advantage among voters who had not expressed a favorable view of either candidate.

The largest share of those voters — a little more than half — hadn’t settled on one to support, meaning there was room for movement.

The universe of such voters is small, but in states like Georgia or North Carolina, where the race could come down to one or two percentage points, “those volatile voters could make the difference,” said Patrick Murray, the director of polling at Monmouth University.

In a Times/Siena poll of the country released last week, 9 percent of likely voters said they were still torn or they planned to support a third-party candidate. When including voters who said they were supporting Mr. Biden or Mr. Trump but only when pushed, that climbed to 13 percent.

Colorado Democrats line up behind Nancy Pelosi for House speaker