WASHINGTON — It was a familiar play by Donald J. Trump: lashing out at his enemies and trying to raise money from it.

The former president this week escalated a standoff over the Republican Party’s financial future, blasting party leaders and urging his backers to send donations to his new political action committee — not to the institutional groups that traditionally control the G.O.P.’s coffers.

“No more money for RINOS,” he said in a statement released on Monday by his bare-bones post-presidential office, referring to Republicans In Name Only. He directed donors to his own website instead.

The aggressive move against his own party is the latest sign that Mr. Trump is trying to wrest control of the low-dollar online fund-raising juggernaut he helped create, diverting it from Republican fund-raising groups toward his own committee, which has virtually no restrictions on how the money can be spent.

The jockeying comes as the party struggles to chart its path forward after losing the House, the Senate and the White House during Mr. Trump’s tenure, with moderate party leaders pushing the party to move beyond the divisive former president while much of the G.O.P. base remains firmly behind him. Who controls a majority of donors’ cash is set to be a fiercely contested point of dispute as Republicans try to regroup and take back power in the 2022 midterm elections.

What’s more, Mr. Trump’s advisers believe the future of party fund-raising is in low-dollar contributions, not the class of major donors who have mostly signaled that they want distance from him after his monthslong push falsely claiming that the Nov. 3 election had been stolen, which led to the Jan. 6 riot at the Capitol.

Mr. Trump’s maneuvering is born partly out of his anger toward Republican leaders who he feels were disloyal when they edged away from him after Jan. 6. The former president is also being encouraged by people like Dick Morris, the notorious political consultant known for flipping between the parties, who has been meeting with him in New York and encouraging him to take on the party he once led. 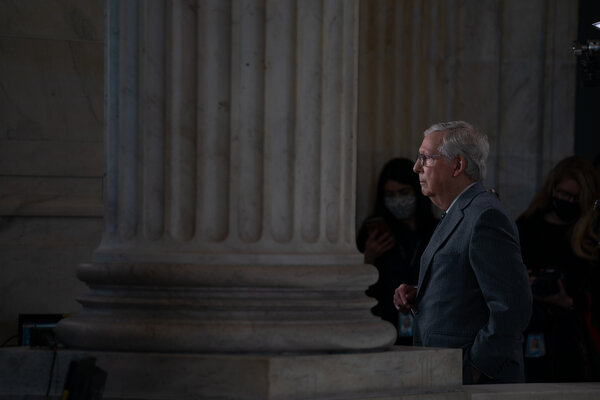 Mr. Trump’s actions could give him a stream of money at a time when his private company is struggling under the scrutiny of investigations, with some discussions of whether properties need to be sold. His business is now politics, and political action committees have few restrictions on how they operate and use their money, according to campaign finance experts.

The former president could, in theory, pay himself and his family members salaries from the money raised there.

“That sort of PAC has no meaningful restrictions on how it could spend its money,” said Adav Noti, the senior director of trial litigation at the Campaign Legal Center.

People close to the former president say there has been no discussion about Mr. Trump giving himself a salary. But historically, his political committees have paid to use his properties, among other things, indirectly enriching him.

Republican fund-raising groups have pushed back against the former president. In a letter on Monday responding to the cease-and-desist request by Mr. Trump’s committee, Justin Riemer, the chief counsel for the R.N.C., stated, “The R.N.C., of course, has every right to refer to public figures as it engages in core, First Amendment-protected political speech, and it will continue to do so in pursuit of those common goals.”

But in a sign of the delicate dance between Mr. Trump and a Republican Party fearful of alienating its most popular figure, Mr. Riemer also said that the R.N.C. had not and would not make fund-raising appeals using Mr. Trump’s name or likeness without his approval.

And on Tuesday night, Mr. Trump released a second statement walking back his earlier attacks on the Republican committees.

“I fully support the Republican Party and important GOP Committees, but I do not support RINOs and fools, and it is not their right to use my likeness or image to raise funds,” he said. But even as he tried to clarify that he supported his party, he gave another plug for his own group. “If you donate to our Save America PAC at DonaldJTrump.com, you are helping the America First movement and doing it right,” he said.

For now, aides said, Mr. Trump’s plan is to stockpile money so he can remain a force in politics and help candidates challenging dissident Republicans like Representative Liz Cheney of Wyoming, who supported impeaching him this year.

Mr. Trump, along with the national party, raised roughly $250 million between Election Day and President Biden’s inauguration. More than $60 million of that went to a new political action committee. That committee and the former president’s campaign committee were both converted to linked political action committees. Mr. Trump’s aides said this week that they had not yet started to send fund-raising solicitations since he left office, but planned to do so in the coming days.

The Republican clash could resonate particularly in the House.

If Mr. Trump is successful in persuading donors to give money to him instead of supporting Republican House candidates directly, he could cause problems for Representative Kevin McCarthy, the minority leader, who is trying to take back the House in two years. He needs to flip five seats to do so.

Some Republican strategists noted that less than a decade ago, Senator Mitt Romney of Utah, the party’s 2012 presidential nominee, was the biggest fund-raising name in G.O.P. politics. Now he barely recognizes his party.

The strategists played down the threat Mr. Trump poses to Republican fund-raising. “The donors that are unique to him who would be affected by that message are people who wouldn’t have donated in the first place,” said Josh Holmes, a political adviser to Senator Mitch McConnell, the minority leader.

Mr. Holmes also said that as the Biden administration rolled out new policies like a nearly $2 trillion relief bill, Republicans would coalesce in opposition and develop new fund-raising constituencies.

“In midterms, you raise a lot of money out of opposition to an administration and policy,” Mr. Holmes said. “In presidential years, it becomes more of a face and name of each of the parties. We’re naturally entering a different era of fund-raising.”

So far, all Mr. Trump’s organization has done is release endorsements for loyalists in key states, like Gov. Henry McMaster of South Carolina, who is running for re-election. But longtime party fund-raisers see that as a reminder by Mr. Trump to those lawmakers that they need to stick with him, or else he could pull his endorsement down the road.

There have historically been tensions between some of Mr. Trump’s advisers and R.N.C. officials. But in a phone call with Ms. McDaniel over the weekend to smooth over the relationship, Mr. Trump played down any intent to directly target the R.N.C. or prevent it from reaching its donors. The takeaway from an overall pleasant conversation, people familiar with the call said, was that Mr. Trump was still supportive of Republican donors’ giving money to the R.N.C. and that he did not plan to stand in the way.

The R.N.C. is planning to hold part of its spring fund-raising gala at Mar-a-Lago, Mr. Trump’s private club in Palm Beach, Fla. That plan was in the works before the cease-and-desist letters. The Four Seasons in Palm Beach, which is hosting the rest of the gala, had social distancing and space requirements that would not allow for the 350 people who wanted to attend the Saturday night reception where Mr. Trump is scheduled to speak. The hotel also expressed concerns about hosting the former president.