The president didn’t “want to create a panic” even as he said it was more dangerous than the flu, he told the journalist Bob Woodward. 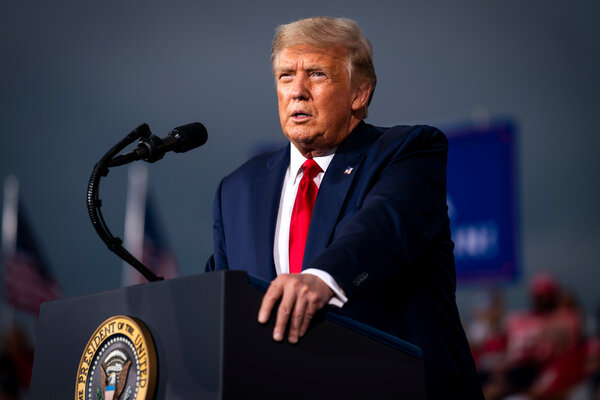 President Trump acknowledged to the journalist Bob Woodward that he knowingly played down the coronavirus earlier this year even though he was aware it was “deadly” and vastly more serious than the seasonal flu.

“This is deadly stuff,” Mr. Trump told Mr. Woodward on Feb. 7 in one of 18 interviews they conducted for his upcoming book, “Rage.” The Washington Post and CNN were given advance copies of the book and published details on Wednesday.

“You just breathe the air and that’s how it’s passed,” Mr. Trump said. “And so that’s a very tricky one. That’s a very delicate one. It’s also more deadly than even your strenuous flu.”

That was a vastly different story than Mr. Trump was telling the public, as he repeatedly insisted it would go away quickly and denigrated concerns from Democrats as merely an effort to tar him.

“I wanted to always play it down,” Mr. Trump told Mr. Woodward on March 19. “I still like playing it down, because I don’t want to create a panic.”

“This is deadly stuff,” the president repeated for emphasis.

Mr. Trump told Mr. Woodward he didn’t recall being told by the national security adviser, Robert O’Brien, on Jan. 28 that the coronavirus represented “biggest national security threat” of his presidency, according to CNN.

“We pretty much shut it down coming in from China,” Mr. Trump said in an interview with Fox News on Feb. 2.

In his interviews with Mr. Woodward during the month of February, a time when Mr. Trump continued to publicly play down the risk the virus presented and gave no clear guidance to the public about precautions, the president was clear he knew it was a threat.

And while he has said publicly that children are “almost immune” to the virus, the president, who is almost always most concerned with how things play in the media, told Mr. Woodward in March, “Just today and yesterday, some startling facts came out. It’s not just old, older. Young people too — plenty of young people.”

In April, Mr. Trump told Mr. Woodward, “It’s so easily transmissible, you wouldn’t even believe it.”

Mr. Trump gave Mr. Woodward extensive access to his White House and to top officials in the hopes the eventual book would be “positive,” in his eyes. Mr. Trump did not speak to Mr. Woodward for his first book on the Trump presidency, “Fear,” and the president has maintained publicly and to advisers that it would have turned out better had he personally participated.

That may not be his conclusion after reading “Rage.”