The collapse of Mazar-i-Sharif signaled the complete loss of Afghanistan’s north as the insurgents appeared on the verge of a full military takeover. 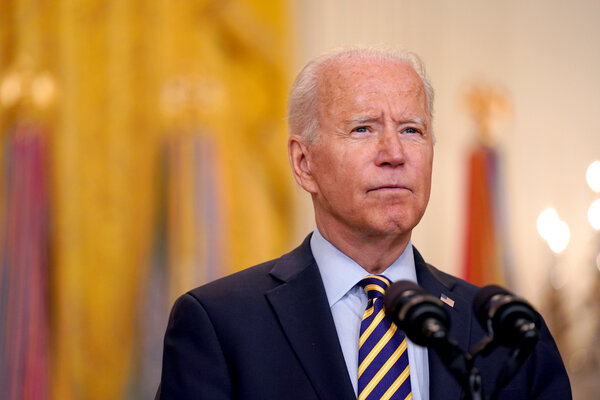 By Helene Cooper and Christina Goldbaum

WASHINGTON — With the Afghan government collapsing to a surging Taliban, President Biden sought to project an image of resolve on Saturday, speeding the deployment of an additional 1,000 troops to Afghanistan as he announced a series of steps that he said would protect American interests.

The announcement came hours after the Taliban seized the last major city in northern Afghanistan, Mazar-i-Sharif, marking the complete loss of the country’s north as they appeared on the verge of a full military takeover. A day earlier, two key cities in southern and western Afghanistan fell to the Taliban.

The insurgents now effectively control the southern, western and northern regions of the country — just about encircling the country’s capital, Kabul, as they press on in their rapid military offensive. The Taliban blitz began in May, but the insurgents have managed to capture more than half of Afghanistan’s provincial capitals in over a week.

The only two major cities left under government control are Kabul and Jalalabad, the capital of Nangarhar Province in the eastern part of the country.

The loss of the north — once the heart of the resistance to the Taliban’s earlier rise to power in 1996 — offered a devastating blow to morale for a country gripped with panic.

Mr. Biden’s statement on Saturday did little beyond asserting what the administration has already been doing: proclaiming support for the government of Afghanistan, warning the Taliban not to attack American troops and undertaking the intensive process of giving special immigrant visas to fleeing Afghans who worked for the United States over the past 20 years.

The president defended his decision to leave the country after two decades of war, a departure that has led to the near-disintegration of the Afghan military.