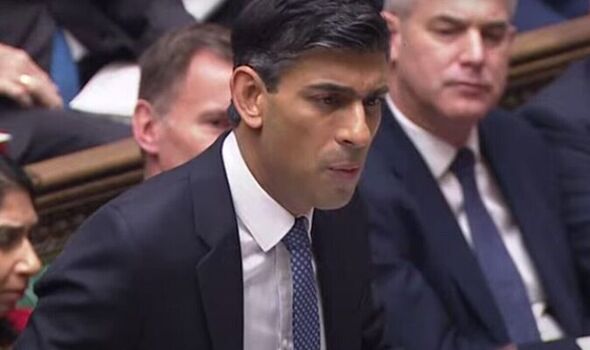 Rishi Sunak has pulled the rug out from under Sir Keir Starmer’s feet by exposing Labour’s record on housing as he snubbed an offer to work with the opposition. The Labour leader had hoped to challenge the Prime Minister over housing, but Mr Sunak turned the tables on the Leader of the Opposition.

On the issue of house building, Sir Keir Starmer said: “Why would he rather cripple house building than work with us to get those targets through?”

To which Mr Sunak replied: “We are not going to work with the Labour Party on housing. You know why? We will have a look at their record on housing. In London the former Conservative mayor in five years built 60,000 affordable homes. The current Labour mayor? half of that amount.”

Sir Keir claimed the PM was “too weak to stand up to his own side on behalf of the country”.

The Labour leader pressed the Prime Minister on his decision to climb down on key planks of his planning reforms, telling the Commons: “The Conservative Party promised the country it would build 300,000 houses a year. This week, without asking a single voter, the Prime Minister broke that promise by scrapping mandatory targets. What changed?”

Mr Sunak replied: “Now the honourable gentleman comes here every week and I know he’s focused on the process and the politics, but I don’t think he has actually taken the time to read the detail of what we are doing to improve our planning system.”

He added: “So, let me just explain what we are doing: We are protecting the greenbelt, we are investing millions to develop brownfield sites and we are providing support and protection for local neighbourhood plans.

“Just this morning the shadow housing secretary said, she said, communities should have control over where homes are built and what sort of homes are built. That’s my position. That’s her position. What’s his position?”

The exchange comes after it emerged the Government is unlikely to meet its housebuilding targets, falling short by 32,000 homes from its original 2016 and 2021 goals for affordable homes, according to MPs.

The Public Accounts Committee also criticised that not enough socially-rented homes are being built to help ease the UK’s housing crisis.

READ ABOUT AN ENGLAND FAN FACING A BACKLASH OVER ‘RACY’ PHOTOS

The committee’s report will add to pressure on Mr Sunak after he was criticised for watering down housebuilding targets to see off a Tory rebellion.

The change to the Levelling up and Regeneration Bill would make the target of building 300,000 homes a year in England advisory rather than mandatory, with councils able to build fewer if they prove the density would “significantly change the character” of their area.

MPs on the committee noted that there is no formal target for how many of the 300,000 overall new homes a year – a goal set out in the 2019 Conservative manifesto – should be affordable, with Treasury funding influencing the plans.

The Department for Levelling Up, Housing and Communities (DLUHC) will deliver 157,000 new homes against its forecast of up to 180,000 under the 2021 Affordable Homes Programme, according to the report.

“Many people in high-cost areas simply can’t afford to rent privately or buy their own home and there’s a desperate need for affordable, secure rented homes. But amid all the building targets there isn’t one for affordable or socially rented homes.

“Local authorities know where and what homes must be built to address the national housing crisis, but don’t have the power to act. The human cost of inaction is already affecting thousands of households and now the building programme is hitting the challenges of increased building costs.

“This does not augur well for ‘generation rent’ or those in desperate need of genuinely affordable homes.”

A DLUHC spokesperson said: “The Secretary of State agrees with the committee that we must build more homes for social rent.

“Increasing the number of genuinely affordable homes is central to our levelling up mission and we’re investing £11.5 billion to build more of the affordable, quality homes this country needs.

“Before the pandemic we had reached the highest rate of housebuilding in 30 years and since 2010 we have built more than 630,000 affordable homes in England, including 162,000 for social rent. But there is much more to do and we look forward to working with the committee on their recommendations.”

Ed Balls savages Rishi Sunak as he warns fiscal plan going to push us into a recession!