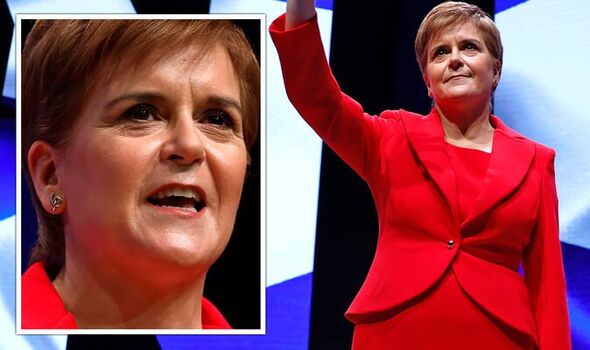 Nicola Sturgeon vowed to “never give up” on breaking up the UK as she pledged to continue serving as Scottish First minister “for quite some time yet”.

The SNP leader told party members in Aberdeen she would do “everything in my power to build the better Scotland we all want to see”.

She added: “Scotland has got what it takes to be a successful independent country, it has it in abundance. Never let anyone tell us otherwise.”

For months rumours have swirled around Holyrood that Ms Sturgeon is preparing to step down as leader of her party at the next election if she is unable to hold a new referendum next year.

The Supreme Court set to this week hear the Scottish Government’s argument as to why it can hold a new independence vote without Westminster’s consent.

But addressing the SNP’s annual party conference today, Ms Sturgeon said she had no intention of stepping down from the top role.

She said: “For as long as I am First Minister – and by the way conference, I intend that to be for quite some time yet – my job, our job, is not done.

“For as long as I am First Minister, I will do everything in my power to build the better Scotland we all want to see.

“Now, I know some people ask – and it is not an illegitimate question – why propose a referendum in the midst of a cost of living crisis?

“Conference, the answer is in the question. The answer is the cost of living crisis. It is the Tory response to it, it is the financial chaos, and it is the damage of Brexit.

“All of that is laying bare, each and every day, the harm being done to people in Scotland because we are not independent.”

The First Minister received a standing ovation as she promised not to step aside any time soon.

Asserting her authority, the veteran nationalist politician also appeared to take a swipe at her SNP colleagues who have expressed impatience at the party leadership’s failure to be more aggressive in the push for independence.

Yesterday SNP President Michael Russell threatened the UK Supreme Court would “fail the people of Scotland” if it did not rule Holyrood can hold its own independence referendum.