The SNP leader has repeatedly stated her desire to hold a second referendum on Scottish independence this year – should her ruling party secure a majority in the Scottish elections, currently scheduled for May. This is despite the Prime Minister insisting the UK Government will not grant Holyrood the powers to do so – more than six years after Scotland voted 55 percent to 45 percent in favour of remaining part of the UK.

Mr Johnson visited Scotland on Thursday but his trip has been heavily criticised by Ms Sturgeon, who questioned whether it qualified as “essential” under current coronavirus guidelines.

But Brexiteer Lord Digby Jones has lashed out at Scotland’s First Minister and her plans for an independent Scotland to break away from a post-Brexit Britain.

He tweeted: “In her zeal for Independence, is Sturgeon telling her subjects (for that is how she’s sees the good people of Scotland: look not at what she says but how she behaves) that future Scottish membership of the EU will entail a common fisheries policy and a limit on budget deficits and state aid imposed by Berlin & Paris? 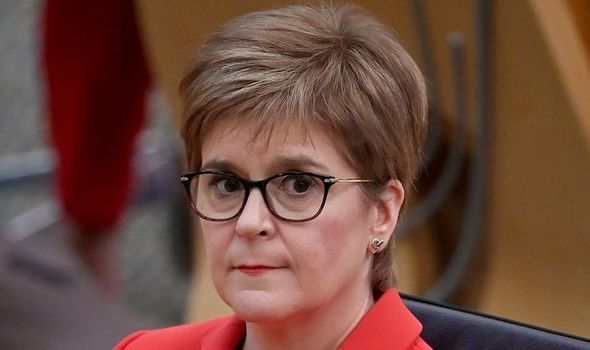 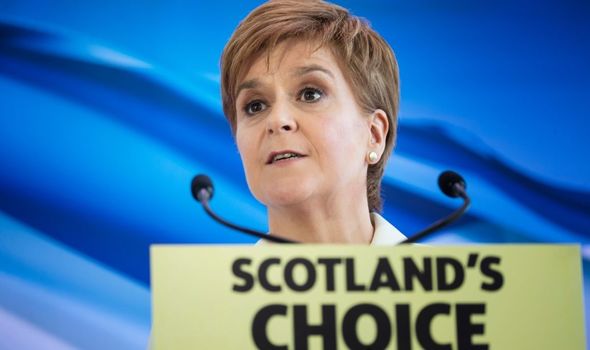 “Oh – and Boris can go to Scotland; he’s your Prime Minister too!”

Mr Johnson flew into Scotland on Thursday morning and visited the Lighthouse Laboratory in Glasgow, as well as other sites helping tackle the coronavirus pandemic continuing to sweep across the UK.

But the trip has come under fire from the SNP, with the party’s Commons spokesman Tommy Sheppard telling MPs that the Prime Minister is “more than capable of patronising us from his office in Whitehall”. 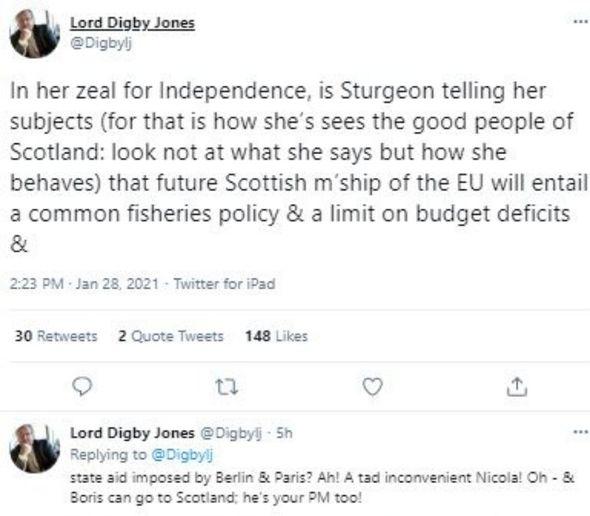 If we’re asking other people to abide by that, then I’m sorry but it’s probably incumbent on us to do likewise.”

However, the visit has been vigorously defended by Downing Street, with the likes of Cabinet Office minister Michael Gove and House of Commons Leader Jacob Rees-Mogg launching a staunch defence of the Prime Minister.

Mr Johnson’s official spokesman also said: “It is a fundamental part of the Prime Minister’s job to go out and see businesses and communities and people.

“These are Covid-related visits. You’ve seen the Prime Minister do a number of them over the past few weeks. 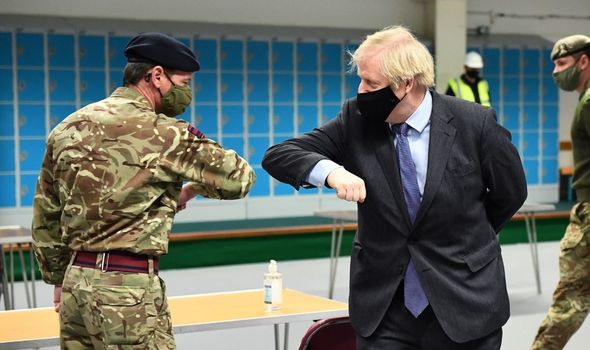 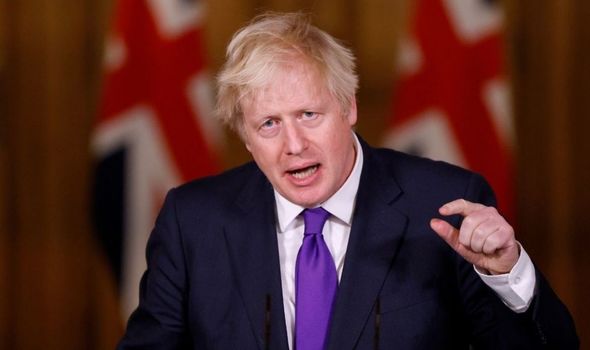 Speaking in Scotland during his visit, Mr Johnson dealt another huge blow to any Scottish independence plans.

He told Scottish nationalists to stop talking “endlessly” about a new independence referendum, insisting most people wanted to see Britain “bouncing back more strongly together” when the Covid pandemic eases.

The Prime Minister said: “I don’t think that the right thing to do is to talk endlessly about another referendum when I think what the people of the country and the people of Scotland want in particular is to fight this pandemic.

“I don’t see the advantage of getting lost in pointless constitutional wrangling when after all we had a referendum not so very long ago.

“The very same people who go on and on about another referendum also said only a few years ago, only in 2014, that this was a once-in-a-generation event – I’m inclined to stick with what they said last time.”