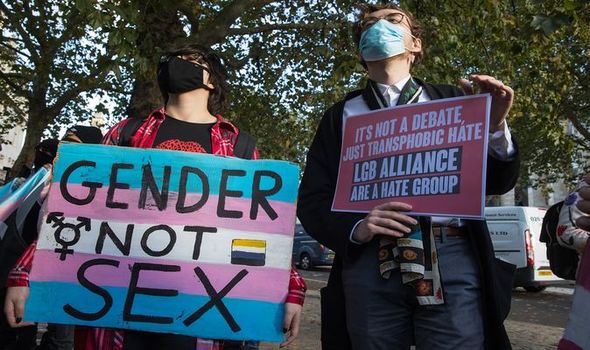 Kathleen Stock, a professor of philosophy at the University of Sussex, was targeted by an anonymous group claiming she is transphobic and should be sacked. One masked protester was pictured standing on the university’s sign with a banner demanding “Stock out”. Ms Badenoch, who studied at Sussex University, said: “I was appalled at the way she was treated.” The minister said “nobody should face bullying or harassment in the workplace”.

“I don’t think she should lose her job,” she added. “I think that she has every right to hold the beliefs… I think she is probably in step with the majority of the population.

“What we in Government are trying to do is show that we do believe that trans people should be free to live their lives as they wish, but where people see a conflict, and that conflict has tended to be around single-sex spaces and the definition of gender reassignment and how gender critical feminists, as they are known, believe that those rights are in conflict, what we can do in order to provide clarity.”

Prof Stock denies she is transphobic but insists gender identity should not outweigh biological sex in policies and laws.

Last week, the academic announced she was quitting her job after “an absolutely horrible time” and “a very difficult few years”.

Ms Badenoch said the Government believes trans people should not be able to legally change gender without a medical professional being involved.

“However, we do not think that goes as far as self ID, we do believe that there should be a process to get a gender recognition certificate, and the process does mean involving medical professionals as well.”

When told some trans activists would say the fact she does not accept the statement trans women are women is in itself a form of violence, Ms Badenoch said it is “sad that the debate has turned into one of name-calling”.

She added: “What I would ask people to do is actually look at what the policies are, what it is we’re doing in order to protect people of all types, whether they are LGBT, of different race, racial backgrounds, the different sexes.

“We are a Government that believes in equality and fairness for all, and everything we’re doing is to make sure that we have an equal society, and we should not get to a point where having a different opinion becomes a reason to insult other people. That’s absolutely wrong.”

‘Disaster!’ Scientist delivers scathing verdict on Hancock ‘Resignation the only way out