Alister Jack says SNP ‘masquerading as a party of government’

The Secretary of State for Scotland Tory MP, Alister Jack, attacked the SNP in the House of Commons in a tense row. SNP MP Stephen Flynn accused the Government of using the Internal Market Bill as “an attack on devolution”. He also referenced comments from Prime Minister Boris Johnson who claimed devolution was a mistake.

Mr Jack quickly retorted that the SNP were separatists attempting to divide the UK with Scottish Independence.

He clarified that Mr Johnson had said that devolution was a mistake in the hands of separatists.

Mr Jack said: “I have frequent discussions with colleagues on the UK Internal Market Bill.

“This Bill is vital to protect seamless trade and jobs across all four corners of the United Kingdom, following the end of the transition period.” 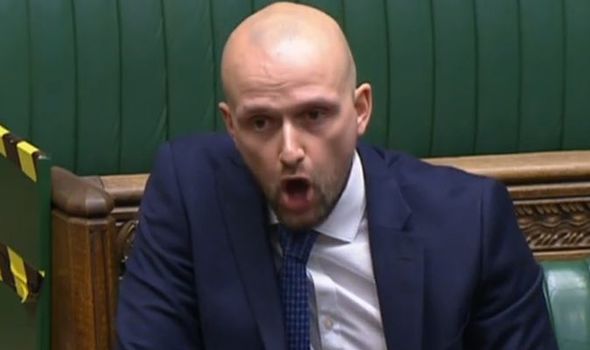 Mr Stephen Flynn then lashed out at the Government and Boris Johnson and arguing against the statements made by the Prime Minister on devolution.

He said: “What the secretary of state did not say there is that the Internal Market Bill, is a blatant attack on devolution.

“But that should not come as a surprise because three weeks ago, the Prime Minister said that devolution was Tony Blair’s biggest mistake.

“A bigger mistake than even the illegal Iraq war, so I ask the Secretary of State, does he disagree with the Prime Minister?”

During his address, Mr Flynn was also booed by some MPs.

Mr Jack replied: “Well, what the Prime Minister said was that devolution was a mistake when it was set up to be put in the hands of separatists.

“The Scottish National Party is a campaigning organisation for independence, for the separation of the United Kingdom and they are masquerading as a party of Government.”

Members of Parliament in the House of Commons could then be heard cheering loudly.

Mr Johnson has since responded to the criticism he faced on his devolution comments and stated he had been referring to “the way the SNP have handled devolution in Scotland.”

He said: “Just because I have criticised the performance of devolution does not mean I want to oppose devolution as a concept.”

MPs to vote on bill which repeals EU freedom of movement

Boris on the brink? Why PM Johnson faces ‘HERCULEAN task’ to keep Tories in Number 10