An angry landlord told Sir Keir Starmer to leave his pub, while Boris Johnson appeared unable to name the current Conservative West of England metro mayor on a difficult day of campaigning for the two main party leaders.

The Labour leader and prime minister were out and about on Monday ahead of May’s local elections.

Sir Keir visited Bath, where he was involved in an incident with Rod Humphris, who runs The Raven pub in the city centre. 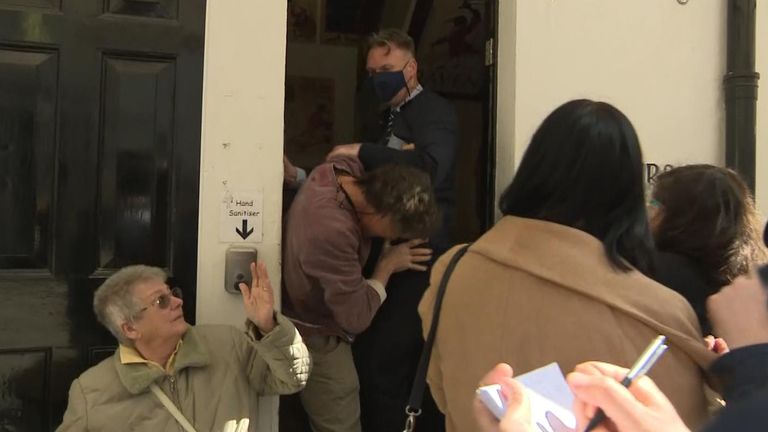 He shouted “that man is not allowed in my pub” and “get out of my pub” as the Labour leader, who was wearing a black face mask, walked out of the door.

The incident, which saw Mr Humphris appear to be held back by security guards, was recorded by reporters covering Sir Keir’s visit.

Footage shows Sir Keir and Mr Humphris talking outside the pub before the confrontation, where the Labour leader appears to mention frontline NHS workers.

“So I really don’t need lectures from you about this pandemic,” Sir Keir can be heard saying.

The Labour leader left the pub following the confrontation, along with members of his team.

It is understood that Sir Keir and his team had pre-arranged the visit with a member of the pub’s staff.

Asked why he had kicked the Labour leader out of his pub, Mr Humphris said: “I had heard that the Labour Party were coming round and he turned up and I told him what I thought of him, basically.

“I think he has utterly failed us as the leader of the Opposition, he has completely failed to ask the questions that needed asking, like, why did we throw away our previous pandemic preparedness?

“Why have we just accepted lockdown?

“Why have we just accepted the loss of all our freedoms?”

Mr Humphris, who said he does not agree with coronavirus lockdowns, said: “He walked into my pub without asking and I threw him out. Or at least, I did my best to throw him out – his security got in the way.”

The 54-year-old said he gave the Labour leader a “piece of my mind”, adding: “I would say this to any politician – it’s not a partisan matter.”

In a video posted on Twitter by Stephen Sumner, a local democracy reporter covering Sir Keir’s visit, Tim Perry, who runs The Raven along with Mr Humphris, said his opinions do not reflect those of the pub.

The Labour Party press office said on its Twitter account that it would “not be amplifying” the footage of Sir Keir and the landlord.

In a series of tweets it said: “A clip circulating online shows Keir Starmer being confronted by someone spreading dangerous misinformation about the COVID-19 pandemic.

“We will not be amplifying it.

“Keir argued that our NHS staff have been working tirelessly to protect public health and that restrictions – while painful – have been absolutely necessary to save lives.”

Mr Johnson, meanwhile, was asked during a campaign visit to Gloucestershire if he was able to name Tim Bowles, the incumbent metro mayor for the West of England.

Mr Bowles is the first metro mayor for the West of England Combined Authority – Bath and North East Somerset, Bristol and South Gloucestershire – and was elected in 2017.

Mr Bowles has announced he will step down at the end of his first term, with four candidates vying to succeed him.

Asked if he knew who the regional mayor was, the PM said: “I’m very much in favour of powerful mayors in the West of England and elsewhere.

“But what I want to see is a strong Conservative mayor in London and across the West Midlands and West of England and across the whole of the country.”

Pushed again to name the current mayor, Mr Johnson replied: “Well I can tell you I’ll be out campaigning for the West of England mayor, and all Conservative candidates, throughout the week.”