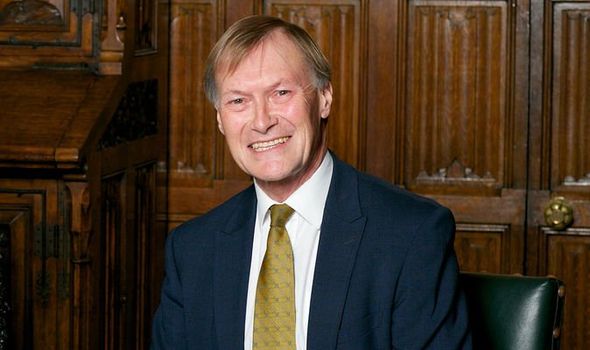 A Conservative and a long-term Eurosceptic, he was first elected in Margaret Thatcher’s 1983 landslide. Raised as a Roman Catholic, he was known politically as a social conservative and as a prominent campaigner against abortion and on animal welfare issues. Unsurprisingly the Brexiteer voted Leave in the 2016 referendum.

He was also known for his championing of his constituency town Southend, in Essex, including a long-running campaign to win it city status.

An animal lover, the MP for Southend West was regularly pictured posing with dogs and called for a ban on animal testing last month.

Despite his true-blue credentials he was popular across the political divide, known also as a true family man and a hard-working constituency MP.

Sir David’s wife Julia worked as a part-time case worker for her husband.

The couple had four daughters ‑ Katie, Sarah, Alexandra and Florence ‑ and a son called David after his father.

Katie Amess is an actress who has appeared in Harry Potter And The Order Of The Phoenix and Captain America: Civil War.

Sir David was born in London’s East End in 1952 and both his parents came from relatively poor backgrounds.

After passing the 11 plus exam, Sir David attended grammar school and ‑ at the same age ‑ decided he wanted to be an MP and went on to form his own political party known as “The Revolutionist Party”.

In 1968, at the age of 16, Sir David joined the Conservative Party and wrote how he had “never looked back since nor regretted my decision”. He then went to Bournemouth University, before becoming a recruitment consultant.

In 1983 he contested and won Basildon for the Tories, when Mrs Thatcher trounced Michael Foot to secure a 144 majority.

However, when the seat was redrawn in 1997 he saw it would inevitably be taken by Labour, and was selected for Southend West. He held the constituency at the last election with a majority of more than 14,000.

He was never a minister during his near four-decade stint in Parliament, although he was briefly a ministerial aide.

A lifelong West Ham United fan, Sir David, 69, came to public attention in 1997 when he was tricked into condemning a made-up drug called “Cake” on the satirical TV programme Brass Eye.

He supported legislation which would have banned abortion in England and Wales unless the mother’s life was at risk or where conception had been caused by rape.

Knighted in 2015’s New Year’s Honours List for political service, the staunch Eurosceptic went on to support Brexit ahead of the referendum.

Following the vote, he aligned himself with Leave Means Leave, which supported a “hard” Brexit.

Earlier this year, Sir David launched a new campaign for a permanent memorial to Dame Vera Lynn, along with her family.