WASHINGTON — After a rocket attack on the American Embassy in Baghdad late last year, the Trump administration renewed its threats of withdrawing diplomats from Iraq. A military retaliation against Iran was discussed, and the White House warned of a drastic response “if one American is killed.” None was.

Nor were any Americans killed in a similar strike this week on a United States military base at the airport in Erbil, in northern Iraq, that officials blame on an Iranian-backed militia. One foreign contractor died, and an American service member and several contractors were wounded, prompting Secretary of State Antony J. Blinken to describe the United States as “outraged” and another official to sternly promise “consequences for any group responsible.”

But the Biden administration’s otherwise measured response to the rocket fusillade in Erbil stood in sharp contrast with President Donald J. Trump’s pitched campaign against Iran — one that often caught Iraq in the crossfire.

And it raised a question both in Washington and in Baghdad: What are President Biden’s red lines when it comes to responding to attacks from Iranian-backed militias that target Americans in Iraq?

Diplomatic and military officials said Mr. Biden’s larger goal was to lower hostilities between the United States and Iran and its proxies in the region, including in Iraq, and to look for a path back to diplomacy with Tehran. This week, the United States extended an opening to new negotiations with Iran to limit its nuclear program.

The effort for rapprochement comes as the Biden administration simultaneously stares down deadly militias in Iraq that officials believe are acting with Tehran’s help and, perhaps, orders. Attacks against Americans by Iran or its proxies could scuttle the broader diplomatic goal, the officials said.

They also could upend a fresh United States attempt to persuade Iraq to lean away from Iran — without expecting to sever their spiritual, economic and cultural ties — by offering incentives instead of threats.

“In order for America to pursue our values and to pursue our interests around the world, we have to be engaged in the world,” Ned Price, the State Department’s spokesman, said after the Erbil attack. “And, of course, engagement in some corners of the world carries added risks.”

So far, two senior Defense Department officials said, there has been no detailed discussion at the Pentagon’s Central Command about a specific military response to the strike in Erbil on Monday as American and Iraqi authorities investigate who launched the attack. Both Mr. Blinken and Defense Secretary Lloyd J. Austin III, who served three combat tours in Iraq, have spoken with their Iraqi counterparts to offer assistance with the inquiry.

Officials blame the Erbil rockets on Iranian-backed militias, such as Kataib Hezbollah and Asa’ib Ahl al-Haq, which had been held responsible for similar previous strikes. But representatives at the White House, State Department and Pentagon have stopped short of making any specific accusations.

“What an important test for the new administration,” Simone Ledeen, the Pentagon’s top Middle Policy official until last month, said on Twitter on Monday. “Will be interested to see if there is a response.”

Iraqis have long been suspicious of American officials who, after ordering a military invasion in 2003 and deposing Saddam Hussein, are still blamed for the security vacuum that followed after U.S. occupation authorities disbanded the Iraqi Army. Anger toward the United States flared again last month, when the Trump administration pardoned four American security contractors for their roles in a 2007 massacre of 17 Iraqi civilians in Nisour Square in Baghdad.

As vice president during the Obama administration, Mr. Biden was among those who oversaw the end of the American-led war in Iraq and the withdrawal of the last 50,000 combat troops in 2011, only to be surprised by the rise of the Islamic State two years later.

Officials said Mr. Biden had a deeply personal interest in Iraq, where his son Beau served in the Army National Guard and was exposed to toxic burn pits that may have led to the brain cancer that killed him in 2015.

His secretary of state, Mr. Blinken, has begun what one senior State Department official described on Friday as a review of American policy in Iraq that allows for a shift in approach. The review will include feedback from the Pentagon before it is presented to the White House, possibly as soon as next month.

The administration is considering returning hundreds of diplomats, security personnel and contractors to the embassy in Baghdad; the numbers were reduced in May 2019 during a period of heightened tensions with Iran, touching off fluctuating staffing levels ever since.

The State Department is not yet ready to reopen its consulate in the southern Iraqi city of Basra, a key listening post near Iran’s border, which the Trump administration closed in September 2018 after the airport compound where it was based was rocketed by militias. Nobody was injured in that attack.

The department is also looking at extending limits that the Trump administration imposed on how much energy Iraq’s government can buy from Iran — an arrangement that critics warn could fund Tehran’s aggressions but provides a lifeline for millions of people who would otherwise go without electricity. 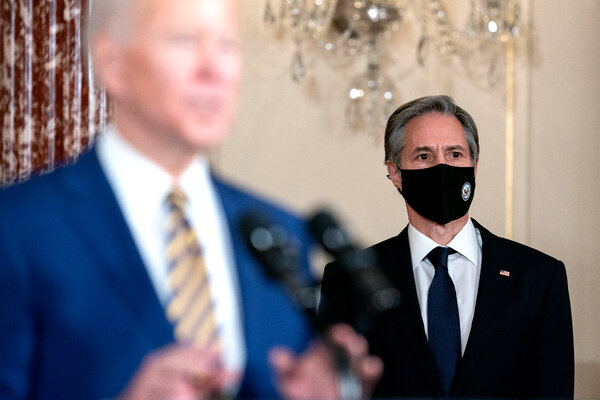 Iraqi banking officials met this week with American diplomats over the issue, which currently forces Baghdad to ask Washington every few months for a waiver to buy energy without facing sanctions.

Two other Biden administration officials said the United States Agency for International Development also is weighing sending more humanitarian aid to parts of Iraq, mostly in the country’s western and northern regions, that were hardest hit by the Islamic State.

But several Pentagon officials and senior military officers said it was unclear what the Biden team’s red lines were when it came to protecting American personnel in Iraq from Iran or its proxy fighters.

After a rocket attack that killed an American contractor in December 2019, the United States blamed Kataib Hezbollah, and bombed five of its bases. That led to a siege at the U.S. Embassy, where protesters trapped diplomats inside the sprawling compound for two days and, in turn, prompted Mr. Trump to order a military strike that killed Iran’s most revered general while he was visiting Baghdad.

David Schenker, the assistant secretary of state for Middle East policy under Mr. Trump, said it was the responsibility of Iraq’s Shiite-led government to constrain the militias that were backed by Iran.

“I don’t think that by showering blandishments on Iran that you’re going to get better behavior in Iraq,” Mr. Schenker, now a senior fellow at the Washington Institute for Near East Policy, said in an interview. “Ultimately, this is all about Iran — the missiles, the weaponry, the funding, the direction all comes from Tehran.”

Military officials say that 14 107-millimeter rockets were launched in the Erbil attack, but six misfired. The attack from territory controlled by Kurdish forces has raised concerns about security gaps in what has been considered the safest region of Iraq.

An antirocket system was in place and operating at the Erbil airport at the time of the attack, but the rockets landed in an area not covered by the system, an American military official said.

U.S. commanders have said that the 2,500 troops now in Iraq — about half the number from last summer — would be sufficient not only to act as a bulwark against Iranian proxies and other influences, but also to help Iraqi security forces hunt down remaining pockets of Islamic State fighters.

The secretary general of the North Atlantic Treaty Organization, Jens Stoltenberg, announced on Thursday that it would increase its military mission in Iraq to 4,000 troops from 500 personnel, and expand training beyond Baghdad.