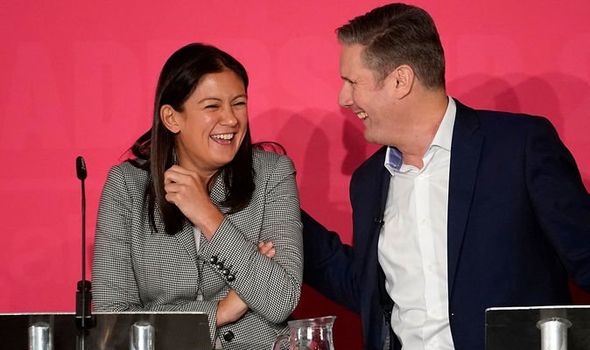 Addressing a drinks reception with the EU ambassador the shadow foreign secretary spoke of the close relations the party wanted to build with Europe.

She said that while Brexit was irreversible, the party was eager to work with Brussels and EU member states to defend common values and interests.

“Keir and I are going to go over the next few months on a tour of European capitals,” she said.

“And of course we will be in Brussels, restoring and preparing those relationships and looking to the future.

The Wigan MP joked that following the pandemic she feared she would be the only shadow foreign secretary in history not to leave her consistency.

She attacked the Conservatives for being “needlessly antagonistic” with the bloc, pledging a Labour government would take a different approach to EU relations.

Ms Nandy said while the Conservatives appeared to have ditched working with Europe to focus on the Indo-Pacific, Labour believed there was a need for close cooperation with Britain’s closest neighbours.

“The Government has much-vaunted a ’tilt towards the Indo-Pacific’ but we think that looks a bit more like a lurch than a tilt for lack of an anchor close at home.

“To put it quite simply, the relationship with democratic partners in our own backyard continues to matter to use and will be central to our vision of the future of this country and how we deliver on that ambition, that promise we make to the people of Britain to always defend and stand up for their interests.”

Amid frictions over the Northern Ireland Protocol, she added Labour would work with EU member states to make a success of Brexit and protect peace in the province.

She said the party would “seek strong close bilateral relations with our friends and neighbours, particularly starting with Ireland given the challenges that we face on the island of Ireland to ensure that we never again use the Good Friday Agreement as a bargaining chip”.