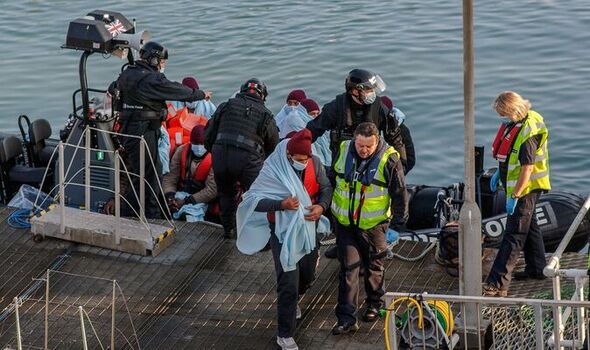 Over 6,000 people have crossed so far this year, with more arrivals expected over the Easter weekend due to the good weather. The Royal Navy took over “operational command” of handling migrant crossings on Thursday, as part of the policy shake-up. And another part of the plan will mean those who are deemed to have entered Britain by unlawful means may be sent to Rwanda where they can apply for asylum.

However, the Archbishop of Canterbury is to call the plan the “opposite of the nature of God”.

In his Easter sermon Justin Welby will say that Christ’s resurrection should be a time for “repentance and renewal”, not for “sub-contracting our responsibilities”.

He will say: “And this season is also why there are such serious ethical questions about sending asylum seekers overseas. The details are for politics. The principle must stand the judgment of God, and it cannot.”

Despite criticism of the scheme, the Government insists it is a necessary step, with a Downing Street adviser saying the deal has boosted support for Boris Johnson’s premiership among Tory MPs, especially from the 2019 “RedWall” intake.

It comes as a Savanta poll over the weekend showed 47 per cent of the public back the new policy, while just 25.7 per cent oppose it.

The Downing Street aide said: “We cannot downplay how important the Home Secretary’s announcement was, especially for the 2019 intake and Northern Research Group.

“We can now, at last, say we have taken steps to control illegal migration.”

Conservatives from Red Wall seats who had seen their support collapsing because of the Channel migrant crossings have come out strongly in support of Ms Patel. Ipswich MP Tom Hunt, deputy chairman of the influential Common Sense Group of Tory MPs, said: “Offshore processing of migrants is the only way to tackle the problem of illegal migration. It is good the Government is finally getting a grip on the issue.”

Ashfield MP Lee Anderson, a former Labour activist, said: “I know there are colleagues that may oppose the Rwanda Agreement but I say there has been far too many deaths in the Channel and if this agreement helps put an end to the evil traffickers risking children’s lives it must be supported.”

And one MP has issued a warning to any Conservatives who might try to join Labour in opposing the move. Marco Longhi, MP for Dudley North, said: “Those colleagues of mine who might disagree and pontificate that this is wrong, they are invited to leave their mansions in the shires and come and visit the hard working-class people who I represent who can’t get schools of their choice or appointments at GPs while they know that £5million a day is spent housing migrants in hotels they cannot afford.”

Ms Patel has said she now expects other countries to follow the UK’s example.

Robina Qureshi, director of the refugee homelessness charity Positive Action in Housing, said of the move: “It’s not about saving refugees’ skins, it’s about saving this Government’s skin.”