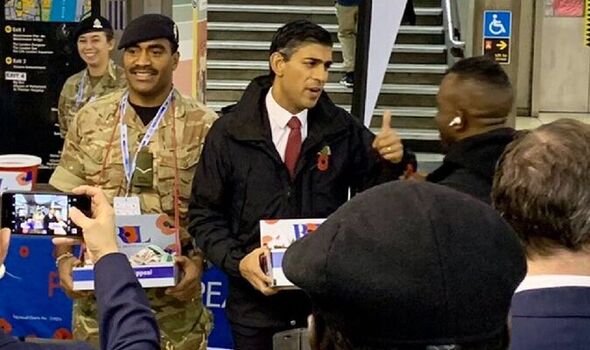 Rishi Sunak has been spotted out selling poppies at Westminster Tube Station during rush hour this morning. The Prime Minister joined soldiers on London Poppy Day to help fundraise for the Royal British Legion ahead of Remembrance Sunday.

Mr Sunak could be seen chatting to a commuter as he held a box filled with poppies.

And at one point he posed for a selfie with another member of the public.

A small crowd gathered to catch a glimpse of the PM, who entered No 10 last month.

Mr Sunak was dressed for the wet morning in the capital in an anorak which he pinned a poppy to.

It comes after Defence Secretary Ben Wallace, a former soldier, stepped outside Downing Street to sell poppies on Tuesday following a Cabinet meeting.

Earlier this week, Mr Sunak was joined by his wife Akshata Murty and their dog Nova on the steps of 10 Downing Street to promote this year’s appeal.

The Sunaks were also joined by five volunteers from the Royal British Legion.

Afterwards he tweeted: “There is no greater sacrifice than that of those who lay down their lives in service of their country.

“So during this year’s Poppy Appeal please give generously to honour our veterans – past and present – and those who continue to protect us today.”

During the appearance on Monday, which is an annual tradition for residents of No 10, Mr Sunak donated what appeared to be two £20 notes.

The PM put a poppy on his wife’s jumper before she pinned one to his suit lapel.

Mr Sunak then put a poppy on his dog’s collar.

It comes at a busy time for the new PM ahead of the autumn Budget on November 17.

Mr Sunak and Chancellor Jeremy Hunt are looking to plug a huge black hole in the nation’s finances.

Meanwhile, the Government is facing intense pressure to get a grip on the migrant crisis with Home Secretary Suella Braverman under fire.

And he is off to the Cop27 climate summit in Egypt, which kicks off on Sunday, in a U-turn after initially saying he would not go.

Mr Sunak’s decision to attend came less than 24 hours after Boris Johnson confirmed he was travelling to Sharm El-Sheikh.

Rees-Mogg targeted by protester at Tory Party Conference in Birmingham