Chief secretary to the Treasury Chris Philp MP has been grilled by Sky presenter Sophy Ridge after he dismissed claims that Kwasi Kwarteng’s mini-budget announcement had worsened the economic crisis, instead blaming “global forces” for the volatility in the UK market. Ms Ridge demanded of Mr Philp that he “let me finish” as the pair disagreed on the disparity between levels of UK and US borrowing. The fallout from the tax-cutting policies announced last Friday have grown with each day as the pound plummeted to a record low earlier this week, with the Bank of England stepping in on Wednesday to introduce emergency measures.

Mr Philp said: “You made a point earlier about whether this has caused the volatility in the market and I think if you just take a step back and look at the markets, whether that is currency markets or bond markets, interest rates, over the last year or so, and in the last nine months particularly, globally we’ve seen quite a lot of volatility.”

Ms Ridge then interrupted, saying: “I’m going to have to come at you there because, you know, you are talking about global forces but it is clear that the UK is an outlier here.”

As Ms Ridge proceeded to bring up a graphic behind her, Mr Philp then attempted to interject, before the Sky presenter said: “Just let me finish, please.

“Look at the yield here on 30-year government bonds. This is the cost of UK borrowing, effectively the bedrock of these pension funds that the Bank of England had to intervene to try and support.” 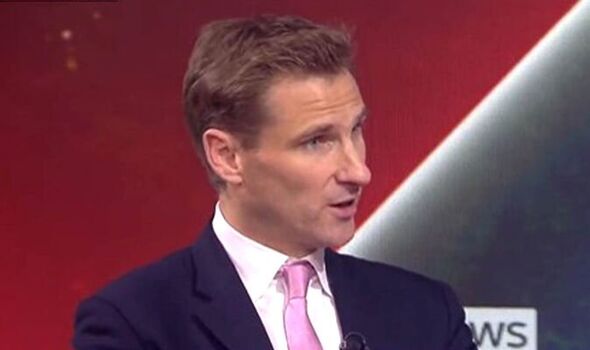 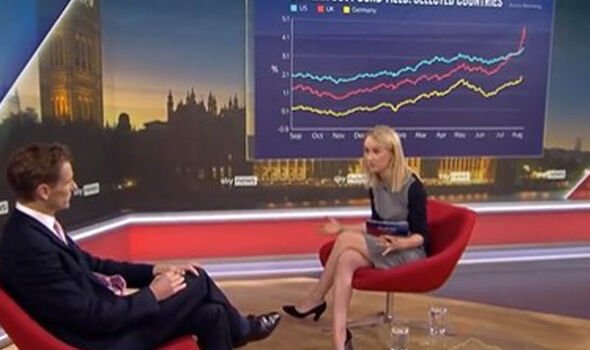 Mr Philp said: “Well, I am not sure this chart is going to be up to date. I checked up on yields before coming in and the US and UK bond rates are pretty close together.”

Ms Ridge said: “This is up to date. You can see it dropping a little bit but you can also see the huge increase. The red line is shooting ahead of the others and meanwhile you were talking about global forces.”

The BoE announced today it was stepping in to buy up to £65 billion worth of government bonds – known as gilts – at an “urgent pace” after fears over the Government’s economic policies sent the pound tumbling and sparked a sell-off in the gilts market. 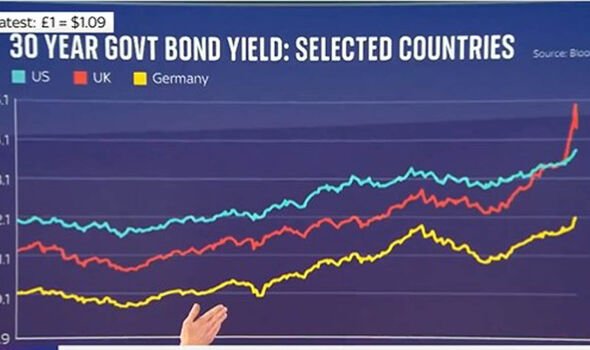 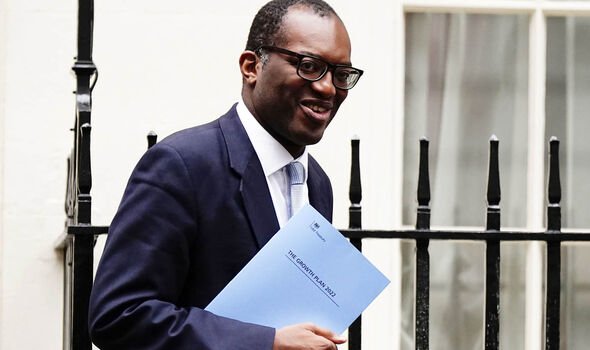 The Bank’s extraordinary intervention, responding directly to the Government’s tax-cutting strategy, will pile further pressure on Liz Truss and Kwasi Kwarteng to defend a vision for the economy that has spooked markets and shocked most mainstream economists.

While the pound hit an all-time record low of 1.03 against the US dollar on Monday, the yield on 10-year gilts – which is a proxy for the effective interest rate on public borrowing – has also soared by the most in a five-day period since 1976, according to experts.

The scale of the crisis in the markets has led to unease in some quarters of the Tory party, while Labour has joined calls for Parliament, currently on a conference recess, to be recalled.

“The Government has clearly lost control of the economy,” Sir Keir Starmer said in Liverpool. “What the Government needs to do now is recall Parliament and abandon this budget before any more damage is done.”

DON’T MISS:
‘Bank of England had to act to protect pension funds’ [REVEAL]
No reason to hold back on cutting debt – EXPRESS LETTERS [OPINON]
‘Grit your teeth and ignore the casino money markets’ [INSIGHT] 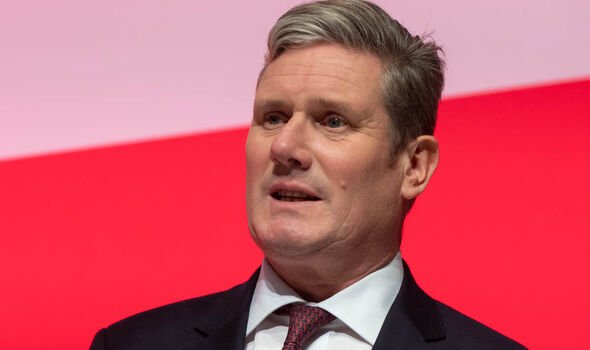 In a bid to reduce future borrowing, the Government is set to ask Cabinet ministers to make efficiency savings in their departments’ existing budgets to help balance the public finances, according to the BBC.

It all comes just days before Tory MPs and thousands of members will descend upon Birmingham for Liz Truss’ first party conference as Prime Minister.

The Bank said: “Were dysfunction in this market to continue or worsen, there would be a material risk to UK financial stability. This would lead to an unwarranted tightening of financing conditions and a reduction of the flow of credit to the real economy.

“In line with its financial stability objective, the Bank of England stands ready to restore market functioning and reduce any risks from contagion to credit conditions for UK households and businesses.”

READ NEXT:
Truss rocked by furious Tory rebellion over ‘extinction-level’ economy
Bank of England steps in to stop £1.5 trillion pensions meltdown.
Kwasi Kwarteng set to issue plea to bankers not to bet against pound
10 years of austerity failed, Truss had to throw everything at growth
Kwasi Kwarteng receives rare intervention from IMF