WASHINGTON — When Senate Republicans sought recently to wall off some federal education aid from schools that decline to reopen once teachers can be vaccinated, a top Democrat accused them of staging a “political show.” If it was, it was a show Republicans were more than happy to put on.

Sensing a potent political opportunity amid parental angst across the country, leading congressional Republicans have begun to hammer relentlessly on President Biden, Democrats and teachers’ unions to open schools quickly. They say doing so is a crucial and long overdue step to keep school-age Americans from falling too far behind amid the coronavirus pandemic.

But the effort to turn shuttered school buildings into a rallying cry is also a way for Republicans to appeal to suburban voters and women — two groups it has been hemorrhaging in the Trump era — as Mr. Biden and his administration struggle to keep their pledge to reopen schools within 100 days.

“It is a good issue because people care about it,” said Senator Roy Blunt of Missouri, the No. 4 Republican and the author of the budget provision, which was rejected on party lines. “I think everybody is hearing the same thing from their constituents: Kids are not learning what they ought to learn, and this is having a huge impact on the way families hope to live.”

Mr. Blunt was one of multiple Republicans, including Senator Mitch McConnell of Kentucky, the minority leader, speaking out on the Senate floor and in committees in recent days about the urgent need to return students to in-person learning.

Republicans say the effort was not coordinated, but happened organically as senators saw the emergence of a driving concern among voters. They argue that they have an advantage on the issue over Democrats, who are politically allied with unions representing teachers who have reservations about returning to school grounds while the pandemic persists.

“While the Biden administration’s own scientists say schools could reopen safely now with smart and simple precautions, their proposal buys into the myth from big labor that schools should stay shut a lot longer,” Mr. McConnell said this week, referring to Mr. Biden’s $1.9 trillion stimulus plan.

Democrats contend that Republicans have only recently begun agitating for schools to be reopened and never put similar pressure on the Trump administration to do so, reluctant to undermine their own party’s president. And they say that a major reason it has been so difficult for schools to return to normal is that former President Donald J. Trump did a poor job managing the pandemic.

They say the issue will ultimately play to their party’s advantage if Mr. Biden can deliver on his school reopening pledge — a promise the White House has been redefining as it confronts the difficulty of the task and pushback from a key constituency in organized labor.

On Friday, the Centers for Disease Control and Prevention urged that K-12 schools be reopened and offered a plan for doing so speedily.

For now, Democrats argue that Republicans are actually making the job harder by proposing to impose conditions on schools that could complicate reopening, rather than ease it. 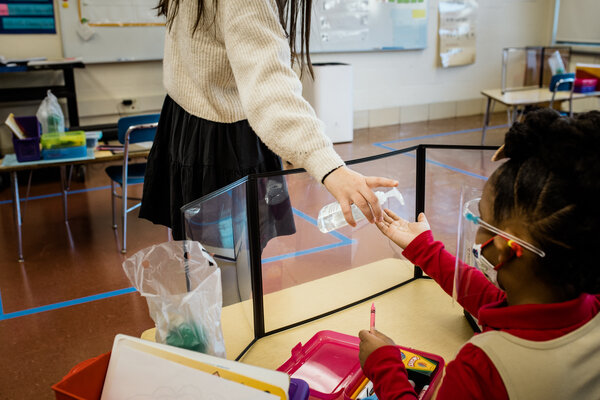 “If we withhold funds and schools cannot implement health-safety protocols, then we are acting counter to actually bringing students back into the classroom,” said Senator Patty Murray, the Washington Democrat who leads the health and education committee.

Ms. Murray was the one who accused Mr. Blunt and other Republicans who tried to alter the budget blueprint with such a condition of mounting a political show.

Republicans may have good reason to do so.

“School closures have radicalized suburban mothers for the last six months,” said John Feehery, a former top House Republican official who has been clamoring for in-person learning to resume. “Republicans are smart to focus on this issue.”

He predicted that if Mr. Biden fails to settle on a workable plan to reopen schools, “the G.O.P. will have its No. 1 issue to take back the House.”

Like their counterparts in the Senate, House Republicans have tried to capitalize on the issue. As an array of House panels worked this week to solidify the details of Mr. Biden’s pandemic aid package, Republicans used an Education and Labor Committee meeting to force a series of votes that would have established requirements for reopening once vaccines are available. Democrats defeated them all, but Republicans got them on the record doing so.

The latest on how the pandemic is reshaping education.