After the C.D.C. updated its mask guidance for vaccinated people, President Biden urged Americans to get along as things maybe, possibly start to return to normal. 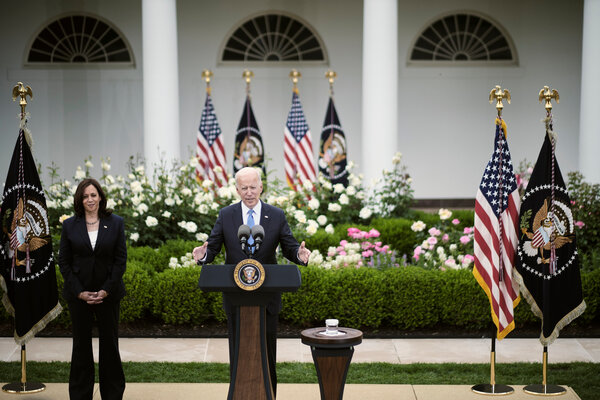 By Katie Rogers and Nicholas Fandos

CHARLESTON, W.Va. — Jill Biden, the first lady, landed in West Virginia on Thursday just as the Centers for Disease Control and Prevention said that vaccinated Americans could, for the most part, remove their masks. So she did.

After weeks of murky guidance from the C.D.C. on what vaccinated Americans can and cannot do, the sight of a maskless first lady disembarking from her plane went far to clear up confusion — at least in Charleston, where she visited a vaccine clinic for children set up inside a high school.

“We feel naked!” Dr. Biden said to a group of junior military officers and reporters who had gathered outside the school to greet her. Seeming to remember that she was the first lady standing in front of a row of cameras, Dr. Biden paused. “I didn’t mean it that way,” she said.

It was a memorable moment that underscored in a very public way just how isolating these past million or so months have been — for one, small talk is harder than it used to be — and just how suddenly the green light toward normalcy had arrived. (Dr. Biden removed her mask, she said, because she had seen the new guidance on CNN en route to West Virginia.)

Back in Washington, there was another odd occurrence: The removal of masks became the first bipartisan activity of the Biden era. At the White House, President Biden struck a statesmanlike tone when he addressed the public in the Rose Garden.

“We’ve had too much conflict,” he said, “too much bitterness, too much anger, too much polarization of this issue about wearing masks.”

Mr. Biden, who last month had been criticized for not removing his mask in the days after the C.D.C. recommended that vaccinated Americans could go without them outdoors, this time promptly addressed the public after the announcement was made.