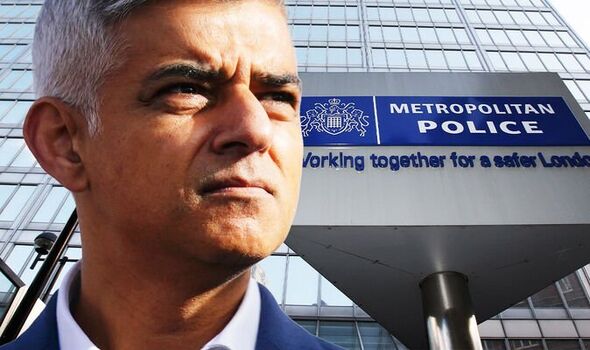 The Metropolitan Police Federation withdrew its support for the Labour politician after Commissioner Dame Cressida Dick was forced out of her position last week.

The body accused the London Mayor of “scaremongering” and “undermining” the trust in the police by publicly criticising the force.

In a searing statement, Mr Khan was blamed for using Dame Cressida as a scapegoat to distract from his own performance.

“What we are viewing is politicians trying to use policing and the career of the country’s most senior police leader to deflect from their own failings,” Ken Marsh, Chairman of the Metropolitan Police Federation said.

“The atmosphere amongst Metropolitan Police officers is horrendous – its rock bottom.

“Officers in London feel saddened and angry that The Commissioner Cressida Dick has been pushed out in the way she has.

“She was reforming. She was changing. The culture is changing. We are deeply disappointed with the actions of the Mayor.”

Mr Khan warned on February 9 that he expected Dame Cressida to present him with a plan to help rebuild trust in the police after a series of scandals.

There had been heavy criticism over its apparent hesitation to launch an investigation into alleged parties held in Downing Street, fury over the rape and murder of Sarah Everard by a serving officer, and anger at the force’s actions following her death in tackling a vigil held in her memory during coronavirus restrictions.

The final straw, however, was a report by the police watchdog which exposed violently racist, misogynist and homophobic messages exchanged by officers based at Charing Cross police station.

The Met Police Commissioner presented the Mayor with a plan 24 hours later on February 10, but he dismissed it as not enough and effectively said he had no confidence in her ability to carry out the top job.

Dame Cressida submitted her resignation on the same day.

Lashing out at Mr Khan’s behaviour, Mr Marsh continued: “The hard work of our colleagues – and public trust in our colleagues – is being undermined by politicians. And by the Mayor of London in particular.

“The continuing scaremongering, sniping and sweeping statements are causing disaffection with the public, not the thousands and thousands of hard-working officers who are out there keeping people safe.

“These officers are being unfairly lambasted for things they haven’t done. Every minute of every day – as we speak – thousands of Metropolitan Police colleagues are out there putting their safety at risk, tackling knife crime and robbery, countering terrorism, capturing child sex offenders, locking up bad people.

“The Federation will continue to speak up for these courageous colleagues. They are being forgotten about by our elected Mayor. Enough is enough. Officers have no faith in Sadiq Khan.”

He added the decision was “not a move we take lightly”.

The Federation said while there was a need for reform, Mr Khan was to blame for painting all serving officers with the same brush.

Mr Marsh continued: “The incidents that have taken place are horrific. We do not want these individuals in the job.

“But the Federation will continue to speak up for our good officers. We totally accept that we have to deliver for the public and work to improve confidence, but if you haven’t got your workforce with you then you are not going to achieve what you’re setting out to achieve.

“My colleagues are working day and night to keep London safe. To be all branded in this shaming and negative way – as they are being by some politicians and many sections of the media – is wholly unfair.”

Home Secretary Priti Patel has now started the search to find a successor for Dame Cressida.

Home Office sources said Mr Khan did not inform Ms Patel of his intention to declare no confidence in the Met Police chief last week.

They said she thought the Mayor’s behaviour was “rude and unprofessional”.

The London Mayor has not yet responded to the Metropolitan Police Federation’s announcement.