Home » Politics » Nigel Farage in furious message to PM: ‘We got Brexit but Johnson isn’t maximising it! 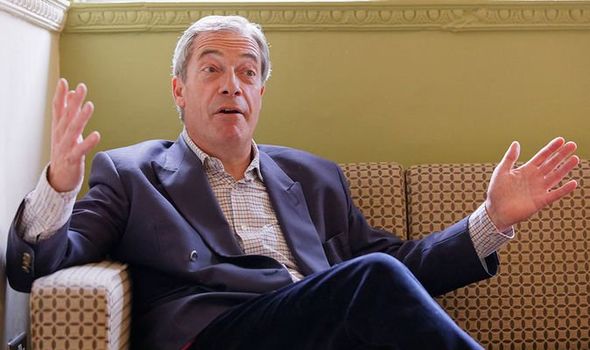 The former Brexit Party and Ukip leader was instrumental in forcing David Cameron to call the 2016 referendum on EU membership ‑ and he is not ruling out a return to frontline politics.

He made history by channelling the frustration of millions of citizens at the interference of Brussels in daily life, and now he is putting the spotlight on the threat to living standards posed by inflation, the influence of hard-left ideology in British universities, and the risk of the country’s lights going out.

Today, the Brexit champion is one of the highest-profile broadcasters on GB News and he uses his platform to put pressure on Boris Johnson’s Government to make the most of the country’s new freedoms.

“I think the frustration is we got Brexit but we have a government which isn’t really doing enough to maximise the opportunities,” he says.

The thought of him returning to party politics would furrow brows in both Conservative central office and Labour HQ.

Speaking to the Sunday Express at a pub in Port Talbot ahead of the filming of the first in a series of Farage at Large outside broadcasts for GB news, he does not stamp on the idea of returning to electoral contests.

“I don’t see the circumstances of me coming back into it but you never know.”

Despite doing more than almost anyone to push the idea of Brexit from the political fringe to the heart of UK politics, he looks back at his time in the European Parliament with nostalgia.

“The only thing I would miss slightly would be the theatre of Strasbourg,” he says. “It was a wonderful arena for me.”

He would love to welcome his old sparring partner, former EU commission president Jean-Claude Juncker, onto his TV show for an on-air pint.

“I did like Juncker and the way we got on and had laughs was proof you can laugh with people you disagree with, which perhaps in the modern world is quite an important message.”

Anti-Brexiteers have been quick to blame the country’s departure from the EU for the chronic shortage of HGV drivers but he has no time for this argument.

“The HGV thing [was] made worse by EU membership because of lots of access to cheap labour and a race to the bottom in standards,” he shoots back.

“What had once been a well-respected job suddenly became a horrible job, plus EU rules on tachographs and all the rest of it meant drivers sleeping on the side of the roads…

“The amber lights have been flashing for some years on this and no one chose to look.”

Mr Farage clearly enjoys his new life as a broadcaster but it is not hard to imagine this political pugilist who prizes personal politeness back on a campaign trail.

He crosses paths with his old adversary David Cameron at an annual party given by a mutual friend.

“We always have a chat,” he says. “There is a level of civility between us even though I think we’re very different people.

“You’d never get Cameron doing something like Farage at Large would you?”