The Deputy Chief Medical Officer, who has been instrumental in the rollout of the UK’s coronavirus immunisation programme, was targeted in Westminster. He was accused of “genocide” and “continually lying to the British people”.

Professor Van Tam, affectionately known by his initials JVT, barely engaged with the protester as he made his way through the street while being filmed and shouted at.

Slamming the abuse hurled at the scientist, the Prime minister’s official spokesman said: “People working to fight the pandemic, which is what Professor Van Tam is doing every single day, should never face that kind of appealing behaviour for doing their job.

“The right to free speech is fundamental but threats of violence or intimidation is never acceptable.”

Professor Van Tam has ascended to national treasure status in the eyes of the British public during the pandemic. 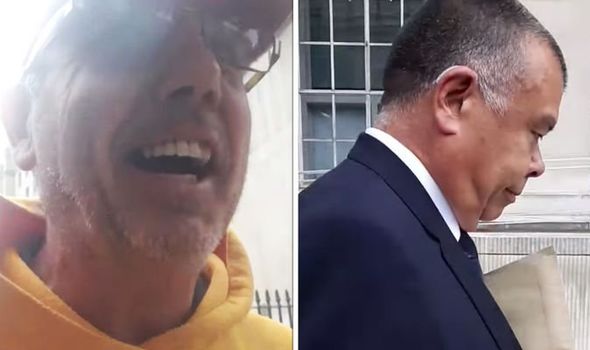 Regularly appearing next to ministers at televised coronavirus briefings, he has become fondly known for using football analogies to make his point.

Targeted in the capital, an antivaxxer approached JVT before accusing him of injecting Health Secretary Matt Hancock with a misery substance when he gave him a Covid jab earlier this year.

He said: “Are you Van-Tam, aren’t ya? What was really in that needle that you put into Matt Hancock?

“Why are you continually lying to the British people? Why are you smiling? This country’s supposed to be in the worst pandemic of all time.”

As Professor Van-Tam walked into the Ministry of Defence building, he continued to shout abuse, following him inside.

“The British people are going to get justice for what you’ve done to this country.

“All of you liars will be going to prison, I guarantee it.

“Every single one of you, a traitor to the country. A genocide.”

Chief Medical Officer Chris Whitty has also been subjected to abuse on the street before, while last week BBC Newsnight journalist Nick Watt was forced to seek cover in Downing Street after being chased by an anti-vax mob in Whitehall.