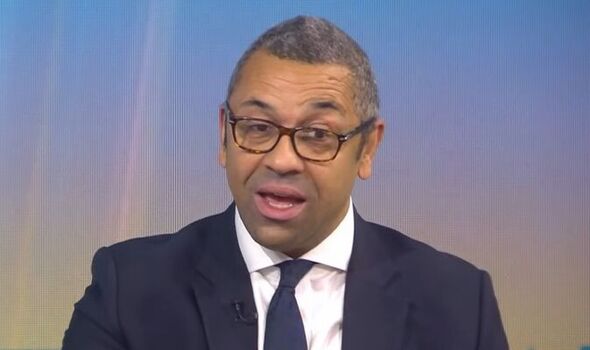 UK Foreign Secretary James Cleverly has refused to commit to increasing pensions in line with inflation, suggesting that the state pensions triple lock is set to be abandoned. The Conservative Party committed to the triple lock in their 2019 manifesto. While Mr Cleverly said that the Government does “take manifesto commitments very seriously”, he would not say whether or not the Government plans to match an increase in the state pension with the current rate of inflation.

Inflation reached 10.1 percent earlier this morning, which Mr Cleverly described as being “concerning”.

But speaking about the latest inflation figures, he added: “They are similar to – in fact, are significantly lower than inflation figures we are seeing in many other parts of the developed world.

“The chancellor and his team will be using those figures to do their thinking and will be coming up with a full packet of measures, the full details, in just over a week’s time.

“And that’s when the announcement on these will be put in the public domain.”

When pressed on the issue, with presenter Kay Burley reminding Mr Cleverly that a commitment to the pensions triple lock was a manifesto pledge, Mr Cleverly responded: “As I say, we take manifesto commitments very seriously, but what I’m not going to do is preannounce budget measures.

“These figures will be taken into consideration by the Chancellor and his team.

“In a little over a week’s time, he will be making a statement to the house with a full range of financial measures”.

GB News: Putin health may be at risk as doctor predicts thyroid issues and cancer