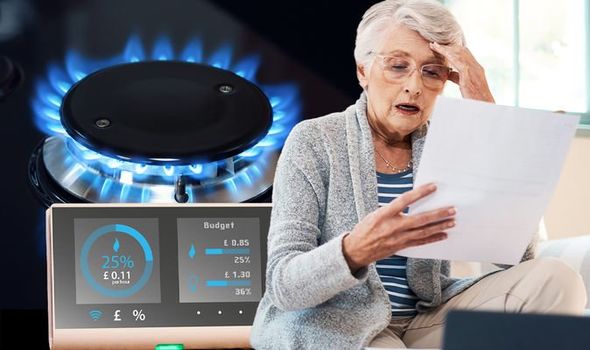 Figures published yesterday showed that householders aged over 65 pay twice as much on average on energy for heating and other domestic needs compared to those under 30. And their bills could rise by more than a crippling £340 a year per person when the Government’s energy price cap is lifted in April.

But Chancellor Rishi Sunak yesterday insisted ministers were “always listening” to concerns about the cost of living. “I understand people’s anxiety and concern about energy bills,” he said.

Labour analysis of data from the Office for National Statistics shows households with residents aged over 65 pay an average of £15 a week per person on energy bills.

Further research based on figures from the House of Commons Library estimates that bills may go up by between 26 and 29 percent in April with an expected hike in the energy price caps.

It means energy spending will increase by £341 a year per person for a typical household with residents aged over 65.

The analysis also shows a higher proportion of older people live in the least energy-efficient households.

The rate was even higher at 20 percent for households where someone was aged 75 or older.

Ms Reeves said the data confirms that older people face a growing cost-of-living “crunch” coinciding with the Chancellor’s decision to temporarily suspend the link between annual rises in the state pension and average earnings.

The shadow chancellor said: “With costs of food and fuel soaring, millions are feeling the pinch, with older people feeling the hit from rising energy prices especially hard.

“Labour would immediately cut VAT on domestic energy bills to ease the burden on households during winter.

“Given they’ve just loaded working people with the biggest tax burden in seventy years this Conservative government should get a grip and tackle this crisis ‑ but instead they just continue to sit back complacently, trapping us in a high tax, low growth economy.”

Labour is proposing to cut VAT from energy bills during winter months and provide Treasury grants and loans to households to improve their energy efficiency.

The party claims the proposals could save the average household around £400 a year.

Earlier this week, Boris Johnson dismissed the idea of a VAT cut on energy bills as a “blunt instrument” that would be less effective than help targeted at the most needy.

Mr Sunak yesterday insisted the Treasury was working to support households facing rises in the cost of living.

During a visit to a vaccination centre in Haywards Heath, West Sussex, the Chancellor said: “Of course I understand people’s anxiety and concern about energy bills in particular ‑ that’s why we’ve put in place a series of ways to help people with energy bills.

“We announced half a billion pounds towards the end of last year to help millions of families – £100-150 to help them get through the winter.

“So there is support there for people but of course we’re always listening, making sure the policy we’ve got will support people in the way we want it to, and that’s what our track record over the last year or two shows.”

Mr Sunak also cited his decision to increase the National Living Wage in the spring and reduce the Universal Credit taper rate as ways in which the Government is supporting low-income households.

Mike Foster, chief executive of the Energy and Utilities Alliance, a not-for-profit trade association, said: “Energy costs make up a disproportionate amount of weekly expenditure of low-income families compared to their better-off counterparts.”

He added: “Everyone is feeling the pinch because of soaring energy bills, and even a temporary cut in VAT would offer some help.”