The German Chancellor insisted the any future relationship deal with Britain cannot come at “any cost”. The influential leader is set to play an influential role in brokering any UK-EU trade agreement in the coming weeks with both sides still at a loggerheads over future fishing opportunities. She will be forced to push French President Emmanuel Macron to compromise on his hardline demands to secure continued access to Britain’s coastal waters after the end of the year.

Mrs Merkel said: “We will talk about the exit of Great Britain from the EU and confirm our common position.

“We want an agreement, but, of course, not at any cost. It has to be a fair agreement from which both sides can profit. But all the effort is worth it and we will, of course, support the negotiations of Michel Barnier, Ursula von der Leyen and the Commission.”

EU leaders will discuss Brexit for the first time in over 12 months at a crunch European Council summit in Brussels this afternoon.

The bloc has pulled plans for plans intensify the talks after the Prime Minister complained recent rounds had “lacked energy”. 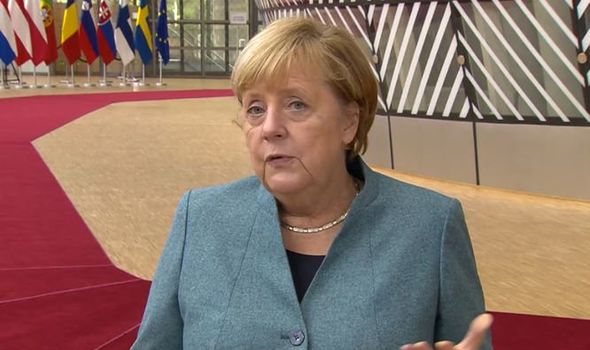 The “draft conclusions” say: “The European Council recalls that the transition period will end on December 31, 2020, and notes with concern that progress on key issues of interest to the Union is still not sufficient for an agreement to be reached.

“Against this background, the European Council invites the chief negotiator to continue negotiations in the coming weeks, and calls on the UK to make the necessary moves to make an agreement possible.”

A previous version of the document had called on Mr Barnier to “intensify negotiations” to ensure a Brexit trade deal is wrapped up before the end of the year.

The conclusions published ahead of the gathering are subject to change depending on how heads of state and government finally evaluate the future relationship negotiations with Britain.