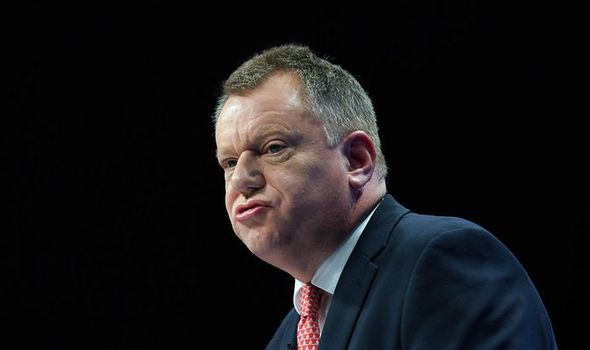 Lord Frost is reported to have offered his resignation last week but had been persuaded to stay on until January. But after news of his departure leaked last night he decided to leave immediately.

A Downing Street source told the Sunday Express they were “shocked” and had been caught off guard, although Lord Frost had discussed it earlier in the week with the Prime Minister.

A source said: “Basically he [Lord Frost] is fed up. He feels he has taken Brexit as far as he can after working on it for two years.

“He feels that this is the end of the road.”

The Cabinet Office minister who negotiated the Brexit deal and is leading the talks on the controversial Northern Ireland protocol is said by allies to be “disillusioned with the direction of the Government” according to an ally.

The fresh blow to Mr Johnson comes after he was humiliated last week with a huge defeat to the Liberal Democrats in the North Shropshire by-election and 101 Tory MPs rebelling against his introduction of vaccine passports.

And major donors have told the Sunday Express they are pulling funding from the Conservative Party until Mr Johnson quits as Prime Minister.

MPs have also warned the Prime Minister has 100 days to sort out his operation or face moves to push him out.

The final straw for Lord Frost, according to a colleague, was the introduction of Plan B which went against a previous promise of “irreversible unlocking” in dealing with Covid-19.

But he is also known to have been frustrated by Mr Johnson’s reluctance to trigger Article 16 in the Northern Ireland talks, ending the controversial protocol and reuniting it with the rest of the UK.

He was also said to be one of the ministers who “vehemently disagreed” with tax rises brought in by Chancellor Rishi Sunak, particularly the care tax adding to National Insurance which broke an election commitment not to raise taxes. There was also unease about the Government’s net zero climate change policy.

Conservative MP Andrew Bridgen said: “This is a body blow to the PM and the Government and any true Conservative.

“Lord Frost’s concerns are exactly the same as many backbenchers and after this week’s byelection it appears also the former Conservative voters’ in North Shropshire.”

Nigel Farage last night said: “I have admired much of what Lord Frost has tried to do. He really believes in Brexit and true Conservative values.

“On the other hand, Boris Johnson believes in nothing other than himself.

“The end may be coming faster than anyone can imagine.”

But Robert Oulds, from the Eurosceptic Bruges Group, was happy to see the Brexit negotiator go, saying: “Lord Frost had allowed himself to repeatedly get outmanoeuvred by the EU “It is telling that his excuses for resigning did not mention Brussels, Northern Ireland and his own failing negotiations.

“He has rightly gone before Brexiteers saw the failure of his mission to implement Article 16, end the Protocol, and his betrayal of Northern Ireland where he was allowing Ulster to remain a colony of the EU.”

Meanwhile, the Liberal Democrat victory in North Shropshire has fuelled demands for a “clearout” of staff in Downing Street and piled pressure on the PM to raise his game, amid fears the Conservatives could lose their majority at the next general election. The panic is also leading senior figures in the party machine to “discreetly look for new jobs”, said one source.

A donor said he and others from the City who have put up cash for the party are “disgusted” by the allegations over secret Christmas parties and “a complete lack of direction” in policy or vision.

Another has said he will end direct support for more than 20 MPs, mostly in Red Wall seats, because it is “a complete waste of money, they are going to lose their seats anyway”. The donor added: “North Shropshire is a complete slam dunk. He [Mr Johnson] has to go and he has to go now or it is going to be complete carnage at the next general election.”

The donor said it was now “embarrassing to admit you are a Conservative” following the allegations over the alleged No10 parties in lockdown. Another donor described Mr Johnson as behaving like “a half-witted pheasant”.

He said: “The atmosphere at the top is completely radioactive. He [Mr Johnson] won’t get another penny from a number of us.

“The big problem is the total incompetence and the fact that this Government does not have a conservative bone in its body.

“We now have the hysteria over the new [Covid] variant and are moving into more restrictions – this is costing us billions of pounds.

“But it’s worse because it is a high-tax, big-state, big-spend government which wastes vast sums of money on things like HS2.

“Everyone is appalled by their behaviour and priorities.

“If we don’t change him now then we are running it too close for the next election.”

There is said to be dismay on the backbenches. One source said “dozens of letters” to the 1922 Committee needed to trigger a vote of confidence have already been prepared, with MPs considering whether to send them over the Christmas break.

Meanwhile, an away day for Conservative MPs to raise morale in the first week of January has been cancelled because of Covid.

A Conservative MP who won a RedWall seat from Labour in 2019 warned Mr Johnson is facing his “last roll of the dice”. And if he cannot improve within three months of May’s local elections “people are just going to go mad”.

Describing the feeling among MPs, they said: “If Boris isn’t careful it’s going to be the last days of Boris, it’s going to be his last 100 days, genuinely.” Mr Johnson was humiliated on Tuesday when 101 Conservative MPs refused to back the introduction of Covid passes for nightclubs and large events in England.

The MP said people in Downing Street were “almost in a sense of denial about how bad it was” and appeared “clueless”.

However, the Red Waller said Mr Johnson’s career was “still salvageable”, but he had to make difficult decisions, including a “clear-out” at No 10.

They said: “If Boris builds a competent team he can be the competence candidate with a bit of flair and the X-factor which he personally brings to it – which is why it’s not over yet.”

The rebellion and disastrous by-election – triggered when Owen Paterson resigned following controversy over his lobbying activities – come on the heels of rows about Covid Christmas parties and “a MPs’ second jobs.

The Government’s shaky performance has allegedly stirred fears among MPs that the Conservatives could lose their majority at the next election and that Labour’s Sir Keir Starmer could stitch-up deals with the Liberal Democrats’ and SNP to become Prime Minister.

He said: “There’s no doubt it’s been a difficult couple of weeks.

“From discussions I’ve had with colleagues there is no doubt the Prime Minister recognises the challenges.

“On a personal level I feel if anyone can turn the current situation around it is Boris Johnson.”

There is strong speculation that David Canzini, widely regarded as a key talent at election guru Lynton Crosby’s CTF Partners, could be brought into Downing Street to impose order.

Yet a former Cabinet minister said the view of “most senior people in the party is that the No10 operation is not fit for purpose”. Warning it was “more than just the Owen Paterson stuff and the parties in Downing Street”, they said: “I think there may also be concern about what looks like non-Conservative policies being pushed through.”

A key concern is the “very regressive” increase in National Insurance contributions. “That should go,” they said. “But there needs to be a return to the sort of policies you expect from a Conservative government.” North West Leicestershire MP Andrew Bridgen, who took the seat from Labour in 2010 and has since increased his majority to 20,400, said voters in the byelection were dismayed at a lack of clear Conservative policies.

He said: “The electorate sent a strong message. They are naturally conservatively inclined people and they are in despair.”

A backbench Tory underscored how the controversy over Downing Street parties had damaged the Prime Minister , saying they had refused recent invitations for drinks at No10 “because I don’t think it’s appropriate to be out drinking at No10 when we’re putting restrictions on people’s freedoms”.

The MP was alarmed the PM had been pictured in Downing Street asking questions in a Christmas quiz when the capital was under tier-two restrictions – .

Although the quiz was conducted online it is claimed that many staff stayed in the building.

The backbencher said: “It’s either breathtaking arrogance or breathtaking stupidity, neither of which are going to be attractive to Conservative voters’ .” But they also doubted any minister could succeed Mr Johnson, because it would not “stop the madness at No 10”. And they did not think he would get back on track because, “I just don’t think Boris is going to change”.

The government will soon set out its levelling-up plans in a long-awaited white paper overseen by Michael Gove, Secretary of State for Levelling Up, Housing and “a comunities.

Tories need to see PM’s will to win

The storms that have hit Boris Johnson and the Conservatives will either prove a catalyst for renewal or be seen as the moment the Prime Minister lost the ability to defy political gravity.

MPs who owe their election victories to Mr Johnson’s power to persuade traditional Labour voters to switch to the Tories hope that his magic can be restored.

They want him surrounded with a strong team in Downing Street and across Whitehall to ensure voters see the Government delivering on its promises.

These MPs want someone beside him who could have stopped the calamitous mishandling of the Owen Paterson affair and also told staff that party games and booze have no place in Downing Street during lockdown.

There is also a hunger among

MPs for the Governmentto use its majority to pass true-blue Tory policies. This is coupled on the right of the party with exasperation and confusion about tax rises .

Mr Johnson needs to address these concerns not just to satisfy grumpy parliamentarians but to ensure a sense of drift and decay does not grip his administration.

The promise to deliver Brexit and keep Jeremy Corbyn out of No10 proved exceptionally potent in 2019 but a brand new message will be needed next time round.

The arrival of daughter Romy suggests there may not be much rest to be had but if the PM is able to sleep soundly it is probably because he knows there is no clear rival for his job.

Pundits will debate whether we are in the final act of the Johnson era but if Tories do reasonably in the May elections there is a decent chance he will continue to lead and shape the country for years.

MPs are still willing him to win. He just needs to show beyond doubt he shares that ambition.