She also vowed to “hit the ground running” with tax cuts and light a bonfire of red tape to help businesses if she becomes prime minister as expected this week. Allies say an emergency Budget will be held “as soon as possible” to help households facing the soaring cost of living and reduce the burden on employers.

Ms Truss also pledged to unite the Conservative Party by ensuring every ­section is represented in the Cabinet she will appoint once she is formally given the top job by the Queen on Tuesday.

Acknowledging the huge challenges ­facing the nation, she vowed: “Britain is a great country. I will guide our country through the storm and ensure Britain’s best days are ahead of us.”

Speaking to the Sunday Express, Ms Truss said: “If I am elected prime minister, I pledge to readers that I will hit the ground running and work tirelessly to deliver for our country in tumultuous times. I am on the side of people who work hard and do the right thing. I will cut your taxes, so you can keep more of your hard-earned money, and so that our great British businesses can get on with creating the jobs and wealth that benefit us all.

“I will bring together a government of all the Conservative talents that is committed to delivering for the British people from day one. My government will be 100 per cent focused on delivery.”

The eight-week leadership contest came to an end on Friday and the winner will be announced by 1922 Committee chairman Sir Graham Brady at lunchtime on Monday.

The long battle saw the Government unable to announce major spending decisions to tackle the cost-of-living crisis, while Ms Truss and rival candidate Rishi Sunak engaged in a brutal war of words.

But Whitehall officials have been working to ensure the new occupant of No 10 can introduce radical policies quickly. 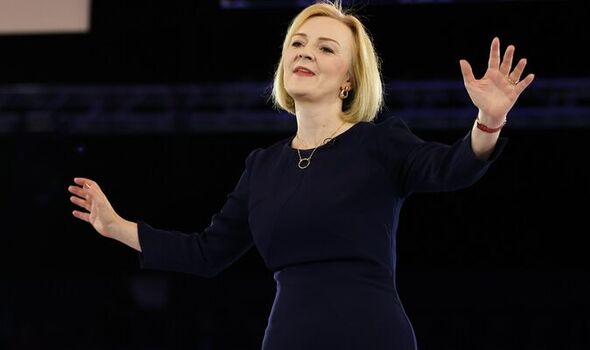 Among the decisions former Tory leader Sir Iain Duncan Smith would like to see is a reversal of the 1.25 per cent national insurance increase imposed by Mr Sunak in April when he was Chancellor.

Writing for the Sunday Express, the close ally of Ms Truss said: “Her priority should be an immediate tax-cutting stimulus, including suspending the green energy levies and the job-destroying National Insurance rise. This will leave more of ­people’s hard-earned money in their ­pockets.” But while cutting taxes is an immediate priority, Ms Truss also aims to reduce the ­reliance on global energy ­markets and will set out plans to ramp up production of North Sea oil and gas.

She will remain committed to Boris Johnson’s policy of investing in the North and Midlands in an attempt to retain the support of “red wall” voters, and will review the way “levelling up” money is distributed to improve investment in regional infrastructure. Her government will also press on with an existing £500million commitment to restoring rail lines.

And in a bid to win over younger voters, she plans to make it easier to buy a first home by allowing rent payments to be used as evidence that potential buyers can afford mortgage payments. There will be reforms to childcare to bring down costs and give parents more choice, and funding for vocational training will be increased.

The Government will also cut subsidies for university degrees which are seen as unlikely to lead to a good job.

The staunch support of Ukraine that Ms Truss spearheaded as Foreign Secretary will continue and she will commit Britain to playing a lead role in a “new Marshall Plan” for Ukraine, working with allies to provide technical and financial assistance towards the country’s reconstruction.

Her government will also set out to undermine Russian dictator Vladimir Putin by publishing more intelligence exposing the Kremlin’s attempts to destabilise Ukraine and other democracies.

On Saturday night President Volodymyr Zelensky described Ms Truss and Defence Secretary Ben Wallace as “great leaders and great friends” as he urged the UK to continue backing his country.

Writing in a Sunday newspaper, he said: “I sincerely wish that Boris’s legacy be preserved. We still need further support and leadership of the United Kingdom.”

But in a sign of the battles to come, union leaders on Saturday vowed to take on Ms Truss over her plans to stop industrial action paralysing the economy.

She is to introduce legislation ensuring a minimum level of service for roads, railways and gas supplies, preventing unions from bringing rail networks to a halt, and increase the minimum threshold of support for strike action from 40 per cent of eligible workers to 50 per cent.

She added: “Rather than dealing with the cost-of-living emergency, ministers seem more interested in attacking workers’ terms and conditions.”

And Irish premier Micheal Martin called for a “reset” of the relationship between the UK and Ireland following rows over the Northern Ireland Protocol.

He said: “The spirit within which we are approaching next week and beyond is a constructive one. We believe the breadth and depth of the UK-Irish relationship is such that there’s an imperative on us all to work together in a constructive way.”

Liz Truss will offer defeated leadership rivals positions in her Cabinet as part of a reshuffle designed to unite the Tory Party following a bruising battle for the keys to Number 10, writes Jonathan Walker.

They include Brexit-backing Attorney General Suella Braverman who will become the new Justice Secretary.

Kemi Badenoch will receive her first Cabinet role. Her opposition to “woke” politics chimes with Ms Truss, and she and Penny Mordaunt are being considered for Education Secretary or Culture Secretary.

Tom Tugendhat is set for his first taste of ministerial office, but is unlikely to be moved straight into a Cabinet role.

Jacob Rees-Mogg is tipped to be Business Secretary, while Thérèse Coffey is in line to be Chief Whip or Health Secretary.

James Cleverly is tipped to be Foreign Secretary, and in a signal to “red wall” voters Simon Clarke is likely to become Secretary of State for Levelling Up, Housing and Communities, with Jake Berry expected to be party chairman.

It is thought Ms Truss’s first choice for chairman was Priti Patel, who politely declined the offer.

Ms Patel will not remain as Home Secretary and is set to leave the Cabinet.

Rishi Sunak is unlikely to be offered a role after signalling during the contest he would refuse to serve under Ms Truss.

It has been suggested she will exact revenge on colleagues who backed him, including Dominic Raab, Steve Barclay and Grant Shapps, by kicking them off the front bench. But she is set to find jobs for at least some of his allies.

There’s life after politics for Rishi

Rishi Sunak is one of the most talented politicians of his generation, having been made Chief Secretary to the Treasury four years after becoming an MP then steering Britain through Covid as Chancellor, writes Jonathan Walker.

He’s expected to leave politics if his dreams of becoming prime minister are dashed on Monday.

But at 42, he has a long career ahead of him. After graduating from Oxford with a first-class degree in 2001, he entered banking, working for Goldman Sachs and hedge fund management firms. A return to finance is an obvious move.

But he would be an attractive hire in Silicon Valley. Former deputy PM Nick Clegg now has a top role at Facebook-owner Meta and ex-No10 aide Rachel Whetstone is working for Netflix.

Mr Sunak will also be in demand as an after-dinner speaker. A predecessor at the Treasury, George Osborne, was known to earn more than £75,000 a time at corporate events.

THE second Elizabeth on the throne will anoint the first prime minister to share her name on Tuesday.

Liz Truss will be on her best behaviour when she meets the Queen at Balmoral. But it was very different in 1994, when she called for the abolition of the monarchy, declaring: “We do not believe people are born to rule”, writes Jonathan Walker.

Elizabeth Truss was a 19-year-old Oxford student and a member of the Liberal Democrats. Her comments, at a party conference, received enthusiastic applause.

But she wasn’t just a Lib Dem, she was a member of the party’s youth and student wing, which was far more radical than the leadership and backed campaigns such as the legalisation of cannabis.

It was how she was brought up. Because her parents were radicals too.

Father John was a left-wing maths professor and mother Priscilla a nurse and teacher who joined Greenham Common rallies.

As a child, Ms Truss attended CND protests where chants of “Maggie, Maggie, Maggie, out, out, out!” were commonplace. In 2014, she said she wasn’t sure whether she joined in: “I probably didn’t know what I was saying. I was seven at the time.”

Born in Oxford in 1975, she grew up first in Paisley, Renfrewshire, before attending a comprehensive school in Leeds.

During the leadership campaign she suggested some of her fellow pupils “were let down by low expectations, poor educational standards and a lack of opportunity”.

But it didn’t stop her progressing to Merton College, Oxford.

Ms Truss had switched to the Tories before graduating in politics, philosophy and economics.

In 2010 she was elected MP for South West Norfolk and became Environment Secretary in 2014.

Ms Truss backed Remain in the 2016 Brexit referendum, but this seems to have done her career no harm. At 47, she’s regarded as a Brexit champion and the person most likely to continue Johnson’s legacy.

One wonders what teen radical Elizabeth would have made of that.

No10 fines issued for parties on eve of Philips funeral