Ms. Cheney, who lost heavily in her Wyoming primary on Tuesday, acknowledged that she was considering a White House bid. She also announced a new political action committee.

This article is part of our Midterms 2022 Daily Briefing 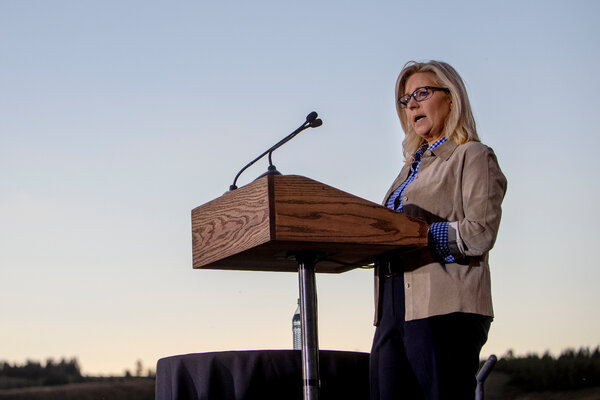 By The New York Times

Hours after her resounding primary defeat in Wyoming, Representative Liz Cheney said early Wednesday that she was “thinking” about running for president in 2024, the clearest acknowledgment yet that she is considering a bid for the White House that would test the viability of her conservative, anti-Trump platform.

Speaking to Savannah Guthrie on NBC’s “Today Show,” Ms. Cheney initially avoided the question of whether she had a 2024 campaign in mind.

But after being pressed, she said, “That’s a decision that I’m going to make in the coming months,” adding, “But it is something that I am thinking about.”

Ms. Cheney, who lost by more than 30 percentage points on Tuesday to a challenger endorsed by former President Donald J. Trump, also announced the formation of a new political action committee, the Great Task, that would be dedicated to opposing any effort by Mr. Trump to return to the White House and to educating Americans about threats to democracy.

“I think that defeating him is going to require a broad, united front of Republicans, Democrats and independents,” Ms. Cheney said.

Ms. Cheney, who has been helping lead the House investigation into actions by Mr. Trump and his allies surrounding the Capitol riot, also spoke critically of Republicans loyal to him who have rejected the legitimacy of President Biden’s victory in 2020.

She warned her party against embracing Mr. Trump’s “cult of personality” and said the country needed leaders who stood by their oath “whether or not it’s politically convenient.”

“Kevin McCarthy does not fit that bill,” she said, referring to the House Republican leader.

Asked if the country was better off with Democrats in charge, Ms. Cheney avoided directly endorsing Democratic leadership in Washington.

“I think we have to make sure that we are fighting against every single election denier,” she said. “The election deniers, right now, are Republicans. And I think that it shouldn’t matter what party you are. Nobody should be voting for those people, supporting them or backing them.”

She added, “They’re using people’s patriotism against them.”