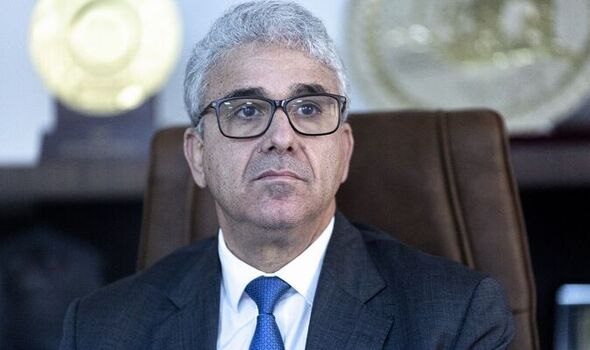 Fathi Bashagha was appointed earlier this year by the Parliament in the East of Libya and is currently engaged in peace talks in Egypt with the western Parliament in Tripoli which has appointed his rival Abdul Hamid al-Dbeibeh as Premier.

Mr Bashagha is seen as the best option to unite the country and spoke exclusively to Express online about his admiration for Britain and Brexit along with with his hopes to end the instability in his country which has made it the major route for terrorism and human traffickers takibng illegal migrants into Europe and on to the UK.

On ending the human trafficking trade which sees ships packed with migrants leaving Libyan ports for Italy, he said: “I believe passionately in the rule of law.

“I will intensify efforts to combat terrorism and organized crime, to address the deteriorating security conditions and to secure our ports and borders.

“Under my leadership Libya will strengthen cooperation between the security and military institutions and judicial authorities.

“Strong action will bring stability for Libya and this will take head on organised criminal gangs.”

“I very much hope the UK will engage with us and provide investment, training and share technology with our security forces. This will keep both of our nations’ safer.”

He also supported plans by Britain to process asylum claims in Rwanda.

“Controlling borders is a priority for all nations. Action taken which deters dangerous journeys will be beneficial to both the nation, and those attempting to enter.”

He also vowed to crackdown on terrorism having alreready made approaches to Turkey for cooperation on the issue.

The Manchester Arena bomber was one of the terrorists to have originated in Libya.

Mrt Bashagha said: “I will intensify efforts to combat terrorism and organized crime, address the deteriorating security conditions and secure ports and borders; and strengthen cooperation between the various security and military institutions and judicial authorities.

“Stability, human rights and peace in Libya can only benefit the UK. We have already seen how cooperation can succeed when in July 2019 we handed Hashem Abedi – involved in the Manchester bombing -over to British authorities. I was Minister for the Interior and during my tenure our Courts agreed to extradite Mr Abedi to the UK because he was a British citizen. It was the right thing to do.

“My focus will always be on peace, security, and the rule of law. I will always fight terrorism and extremism. The UK should engage with us, invest in Libya and look to future trade and security cooperation with Libya.”

Outlining his priorities for a country which has been torn apart since the fall of the Gaddafi regime, he promised “complete transformation.”

“Libya is a wonderful country with so much potential and so much to offer the world. Yet it is being held back by internal strife, corruption, and if neglected can become a breeding ground for terrorism.

“I am absolutely committed to national reconciliation, reform of our economy, human rights for our people, and an end to corruption.

“I will restore stability in our country, and build a state based on justice, law, and equality.

“I will accelerate the transition to advanced technologies and advanced administrative systems, and this will pave the way for Libyan professionals to develop their capabilities and enhance their skills.  I will create new employment opportunities which will help improve all Libyan citizens’ living standards.

“Libya will be totally transformed and finally allowed to fulfil its potential. I will ensure Libya gets the bright future it deserves.”

Mr Bashagha also hopes to visit the UK soon to hold talks with ministers and supporters.

He said: “I am a great fan of the UK. I understand the reasons the British people made the decision to leave the EU. That was a matter for the people, and their verdict was decisive.

“I do hope that the UK and Libya can agree new trading arrangements. Brexit has provided you with the opportunity to forge new relationships, and now, with Libya on the path to stability, our two nations must work closer together.”

But he pointed out that his country is also suffering from actions by Vladimir Putin’s regime with Russian “Wagner mercenaries” fighting in the civil war.

“Let me be clear. There is no place in Libya for the Wagner Group or any other Russian or Chechen soldiers.

“I am also concerned by the circulating reports that there is a close relationship between the Chechen leader and Abdul Hamid al-Dabaiba, as well as the recent visit of Chechen’s Deputy Mufti to Libya.

“As Minister for the Interior, I organised training for security services, began the dismantling of armed groups and the reintegration of individuals from armed groups.

“That will continue to be my focus. The priority has to be to bring security, stability and democracy to Libya. All my work will be targeted to those goals.”