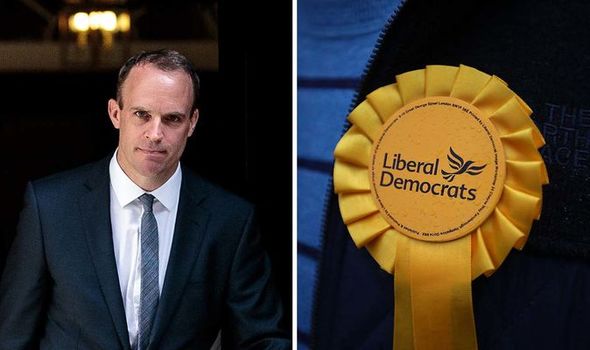 The party argues that with just a fraction of the swing seen in North Shropshire it can unseat justice secretary Mr Raab from Esher and Walton. Last month’s success at overturning a Tory majority of nearly 23,000 in North Shropshire in the by-election held in the wake of Owen Paterson’s resignation has buoyed Lib Dem hopes that they can take seats in the Conservative “blue wall”. This followed June’s victory in the Chesham and Amersham by-election which saw a 16,223 Conservative majority overturned.

Mr Raab has a majority of just 2,743 and the Lib Dems plan to have a candidate in plce early this year to start campaigning.

The party is also intent of turning South Cambridgeshire from blue to yellow and ousting Tory MP Anthony Browne, who has a majority of just 2,904. The Lib Dems control the district council and local councillor Pippa Heylings has been selected to fight the seat.

Ambitions are so high in the pro-EU party that it is also targeting Eastbourne, where Brexiteers secured resounding success in the 2016 referendum. The Lib Dems argue the North Shropshire result shows “we can win seats in the Blue Wall which previously voted to Leave the EU”.

Conservative MP Caroline Ansell won the seat with a majority of 4,331 but Lib Dems insist the constituency is “very much in play” and have selected Josh Babarinde ‑ a councillor who founded a smartphone repair service staffed by young ex-offenders – as the candidate.

“Across the Blue Wall and beyond, we hear real anger about Boris Johnson’s incompetence and double standards. People feel taken for granted by him and his Government. 2021 will be known as the year voters simply had enough of Boris Johnson and his government.

“The British public won’t stand for his lies and broken promises any longer.”

A Conservative party spokeswoman said: “The Conservatives are focused on delivering for people up and down the country as we build back better from the pandemic.”