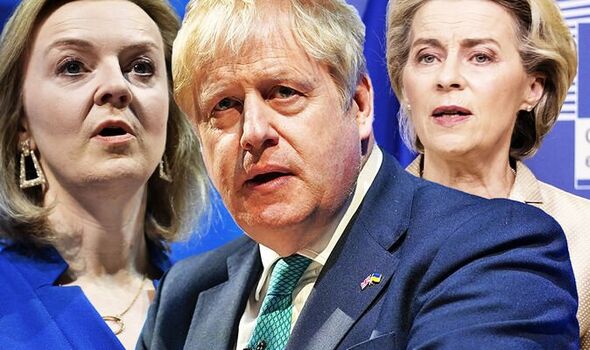 In a private briefing to UK journalists, the senior EU diplomat went as far as suggesting that without Brexit then there could have been a different outcome in Ukraine.

The admission that the UK is driving European policy after Brexit is a blow for Rejoiners who had argued that the UK would be diminished and “a fringe country” outside the EU.

The diplomat said: “Let’s be honest we saw it with the vaccine and now with Ukraine. Britain outside the EU is more nimble and able to make decisions more quickly.

“With the coronavirus vaccine you [the UK] were able to get it agreed and rolled out weeks before the EU.

“It is the same with this crisis. The UK saw the threat first and was starting to prepare sanctions and other actions before the rest of Europe.”

The diplomat added: “Some in the EU complain that Britain is trying to bounce the EU into action too quickly.

“But if it had not been for that then we would be seeing the issue [Ukraine] discussed in endless committee meetings with no resolution. Too often that’s the EU way.”

The envoy added: “We regret the UK leaving but we have to admit it is more nimble and able to react quickly to crises.”

The diplomat also said that the UK’s military hardware and training for the Ukraine were responsible for the Russians being pegged back and the resistance there holding firm.

The diplomat noted: “It’s the UK anti-tank weapons which have made the difference.

“It was also the UK who started providing the Ukrainians training some time ago in preparation for this.

“It has made the difference in this war.”

Ukrainian soldiers have been reportedly shouting “God Save the Queen” when they have been using British supplied anti-tank weapons and a recent poll there had Boris Johnson as the most popular international politician.

Tens of thousands of Ukrainians start to arrive next week