Home » Politics » Labour warning: Party must be anti-crime and attack cancel culture to be electable 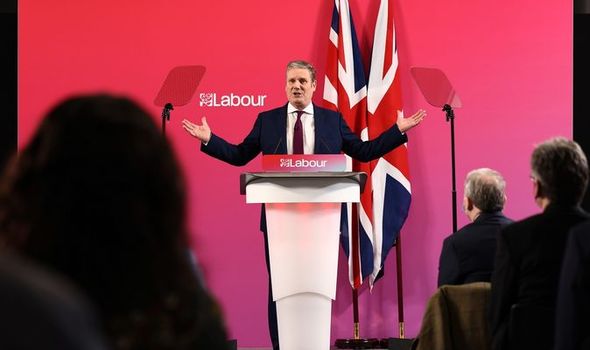 Renaissance, a group launched by Labour figures including Stephen Kinnock in the wake of the devastating 2019 election defeat, says the party “should not be shy” in raising concerns about “crime and anti-social behaviour, poor conviction rates, weak sentences and re-offending”. In a presentation distributed to activists who want to see swathes of the country switch back to red from blue, it recommends they repeat the line that under the Conservatives “criminals have never had it so good” and accuse the Tories of “defunding the police”.

Pundits were shocked in 2019 when traditional Labour seats in the country’s historic industrial heartlands, the so-called red wall, backed Boris Johnson’s Conservatives. Renaissance claims that more than six out of 10 of the seats Labour needs to win are in the North, the Midlands or Wales.

It wants to reconnect Labour with values including family, hard work and decency and the presentation urges the party to put forward “a post-Brexit vision that stands up for Britain, that is forward-thinking and optimistic”.

It recommends Labour should “relentlessly promote its core identity as the party of working people,” stressing that it wants to deliver “good jobs you can raise a family on”. Rather than get caught up in “culture war distractions,” Renaissance advises activists to “err on the side of free speech and open debate – and do not become associated with cancel culture”.

The group found the Conservatives are seen as having a record of delivery on Brexit, the furlough scheme, the vaccine rollout, and having delivered a stable economy. Voters were found to “resist taxes on higher earners who have ‘worked hard’” and it cautions against attacking the “austerity” policies introduced by the Conservatives in the previous decade.

Arguing that “Labour’s former voters have made up their mind that austerity was a necessary evil” it recommends the party focuses on its commitment to delivering value for money and contrasting this with “eye-watering Tory waste”.

Renaissance says that criticism of the government’s immigration policies must be “always accompanied by constructive alternative policy solutions”. Similarly, Labour must put “the retention and creation of work and good jobs” at the heart of its approach to achieving net zero carbon emissions.

Mr Kinnock said: “This year we must, and we will, show Britain that we are the party of prosperity – with our plan for growth and good jobs; of security – with a plan for safer neighbourhoods and more resilient Britain that can stand more firmly on its own two feet; and of respect – where we spend every penny of taxpayer money wisely.”

It is understood that internal Labour polling suggests that the party could be on course to win back 40 red wall seats if an election is held today. It is also understood there is confidence in Labour circles that if a by-election was held in Bury South following Christian Wakeford’s defection to the party from the Conservatives he could win by 24 points.

EU PANIC: Widdecombe says months of WTO trade will force Brussels back to UK after Dec 31

The Biden administration is sending Afghan visa applicants to an Army base in Virginia.