Home » Politics » Key Republican senators say they’re ready to take up an infrastructure deal, paving the way for a vote. 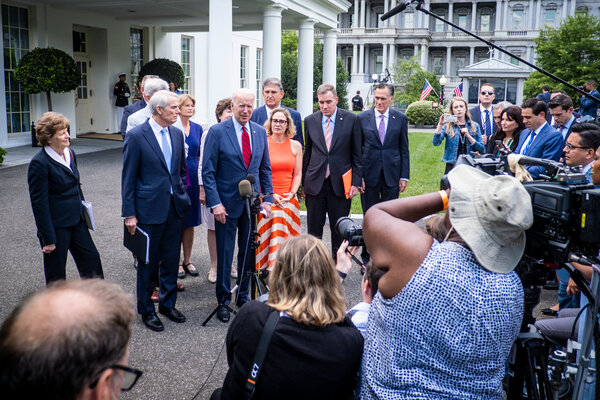 Key Republican senators said on Wednesday that they had resolved the biggest sticking points to a final agreement with the White House and Democrats on a far-reaching infrastructure bill, and planned to vote to allow the package to advance, paving the way for action on a crucial piece of President Biden’s agenda.

“We now have an agreement on the major issues and we’re prepared to move forward,” said Senator Rob Portman, Republican of Ohio and a lead negotiator for his party in bipartisan talks on the infrastructure measure.

The emerging deal was expected to fill in the details of an outline the group triumphantly announced at the White House in late June, but has spent weeks haggling over as they toiled to translate it into legislative text while keeping their fragile coalition together.

While details were not immediately available, the bill under discussion would pump the largest infusion of federal money in more than a decade into the nation’s aging public works system.

Republicans blocked the Senate from moving ahead with the plan last week, saying that too many issues remained unresolved. Mr. Portman’s comments and those of other Republicans in the group, who spoke after meeting Senator Mitch McConnell of Kentucky, the minority leader, suggested that they had cleared away the biggest obstacles to a deal.

It remained unclear whether enough Republicans would join the five core negotiators in advancing the deal. And Senate Democrats, including at least one key committee chairman, said they planned to wait for more information at a lunch meeting to discuss the proposal before weighing in on it.

“We’ll see shortly,” said Senator Mark Warner, Democrat of Virginia, another of the negotiators of the plan.

Earlier Wednesday, Senator Chuck Schumer, Democrat of New York and the majority leader, had expressed optimism about the prospect for finalizing an agreement, and said a second test vote on the measure could come as early as Wednesday night.

If the compromise holds, Democrats would have to maneuver it through the evenly divided Senate over a Republican filibuster, which would require the support of all 50 Democrats and independents and at least 10 Republicans. That could take at least a week, particularly if Republicans opposed to it opt to slow the process.