John M. Patterson, a defiant segregationist who defeated and preceded George C. Wallace as the governor of Alabama as the South plunged into the violence and turmoil of the civil rights movement in the late 1950s and ’60s, died on Friday at his home in Goldville, Ala. He was 99.

In a state where white supremacy, racism and brutality against African-Americans were ways of life, Mr. Patterson, supported by the Ku Klux Klan and the White Citizens’ Councils, made Mr. Wallace, who was then a state judge backed by the N.A.A.C.P., look like a milquetoast moderate when he defeated him in the 1958 Democratic primary. In those days, a primary victory was tantamount to election in heavily Democratic Alabama.

The youngest governor in Alabama history at 37, Mr. Patterson had only one term, from 1959 to 1963, and was constitutionally barred from a second consecutive term. But his tumultuous tenure coincided with centennial celebrations of the Civil War. Rebel yells and Confederate flags — one fluttering atop the State Capitol — were the backdrop for a toxic racial climate on his watch.

Mr. Patterson voiced no objections, calling it “a free country.”

The police protection that he pledged for Freedom Riders in Montgomery in 1961 did not materialize, and he blamed the victims for beatings inflicted on them by a white mob. He threatened to arrest federal marshals who interfered with local law enforcement, and insisted that civil rights protesters and “outside agitators” caused riots. 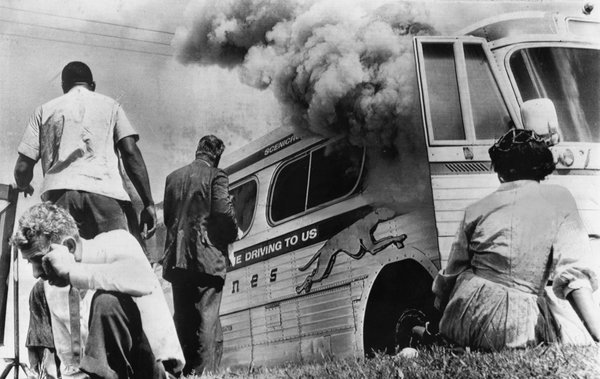 Five years after the Supreme Court had outlawed racial segregation in public schools, Mr. Patterson vowed to continue resistance, even if it meant closing schools. Integration, he warned, would lead to bloodshed. “If a school in Alabama is integrated, it will be over my body,” he was quoted as saying in the summer of ’59.

Mr. Patterson, who endorsed John F. Kennedy for president in 1960, played a secret role in the Bay of Pigs invasion, supplying a half-dozen B-26 bombers from the Alabama National Guard to transport Cuban exiles to training sites in Central America in 1960, and in the American-supported landings in 1961 that failed to overthrow the Soviet-backed Cuban government of Fidel Castro.

Governor Patterson and the Alabama Legislature were credited with increasing funding for education, highway construction and improved waterways and docks. They also built more facilities for the mentally ill and cracked down on loan-sharks who preyed upon the poor.

Historians say, however, that Mr. Patterson will most likely be remembered as one of the most intractable white supremacists of his day, comparable to Gov. Ross Barnett of Mississippi, Gov. Orval Faubus of Arkansas and Mr. Wallace, who had not forgotten the lesson of his loss to Mr. Patterson four years earlier — that moderation in racial politics was no way to get elected in Alabama.

Mr. Wallace succeeded Mr. Patterson in 1963, proclaiming: “Segregation now! Segregation tomorrow! Segregation forever!” He managed to overturn the ban on consecutive terms and held a 24-year stranglehold on Alabama politics. In the late ’70s, he announced that he had become a born-again Christian and apologized for his segregationist actions.

Mr. Patterson, who went on to a long judicial career, also tried in later years to distance himself from the images of his past, calling segregation and the denial of voting rights outrageous and contending in public appearances and interviews that political expediency had prompted his racist campaign and conduct in office.

“I used the race issue to get elected, like George Wallace and a lot of others, and if that’s wrong, that’s wrong,” Mr. Patterson told Thicket, a Birmingham, Ala., online magazine, in 2008. “If you didn’t do that, you wouldn’t get elected. You might as well go home and forget it.”

Once in office, Mr. Patterson said, he was constrained by laws and political pressures to refrain from action against segregation. “The law required that the schools be segregated, and the Legislature was not about to change the law,” he told the magazine. “If I had attempted to force some issue myself, the Legislature might well have impeached me.”

Mr. Patterson said his support for Barack Obama, the nation’s first Black president, in the 2008 election should have surprised no one. “A lot of people have tagged me as an arch-racist,” he said. “They’ve got it wrong. I have no problem supporting Barack Obama. I never grew up in a home with racist feelings.”

John Malcolm Patterson was born in Goldville on Sept. 27, 1921, one of six children (two of whom would die in childhood) of Albert and Agnes (Benson) Patterson. His parents were schoolteachers, but his father became a lawyer in Phenix City, where John graduated from Central High School in 1939. He soon joined the Army as a private, attended Officer Candidate School, became an artillery lieutenant and fought in World War II in North Africa, Sicily, mainland Italy, France and Germany. He was discharged as a major in 1945.

His marriage to Gladys Broadwater in 1942 ended in divorce in 1945. In 1947, he married Mary Joe McGowin. They had two children, Albert and Barbara, and were divorced. In 1975, he married Florentina Brachert, who is known as Tina. Complete information on his survivors was not immediately available.

Mr. Patterson earned a law degree in 1949 from the University of Alabama. He joined his father’s firm but was recalled to active duty during the Korean War and was an Army lawyer from 1951 to 1953. He then returned to law practice in Phenix City, a town notorious for brothels, gambling joints and other vices run by racketeers who controlled local politicians and catered to G.I.s from Fort Benning, Ga.

Pledging to clean up the vice, Albert Patterson won the Democratic nomination for state attorney general in 1954. He was soon shot dead by an assassin. (A deputy sheriff was convicted of the murder.) Vowing to carry out his father’s promises, John Patterson, who had shown little interest in politics, took his father’s place on the ballot, won a special election and became attorney general.

With the muscle of the National Guard, he drove the racketeers out of Phenix City in his first year in office. He also attacked widespread corruption in the administration of Gov. James E. Folsom. Planning to run for governor, Mr. Patterson catered to the electorate by winning a court order to ban the N.A.A.C.P. from operating in the state.

By the 1958 election, Mr. Patterson was Alabama’s toughest defender of segregation. Klansmen papered the state with his campaign posters, and in the primary he easily defeated Mr. Wallace, who supported segregation but not vehemently, and was viewed by many white voters as a racial moderate. After losing the election, Mr. Wallace, using a widely quoted racist slur, said that he had been outmaneuvered, and vowed to never let it happen again.

After leaving the governorship, Mr. Patterson lost races for governor in 1966 and for chief justice of the Alabama Supreme Court in 1970. Later in the ’70s he taught at Troy State University (now Troy University). Governor Wallace appointed him to the Alabama Court of Criminal Appeals in 1984, and he won two elections and served until 1997, when he retired to his farm in Goldville.

In 2004, Mr. Patterson was chief judge of a special judicial panel that upheld the State Supreme Court’s removal of the chief justice, Roy S. Moore, for refusing to obey a federal court order to take down a monument of the Ten Commandments at the state courthouse. The courts declared that the monument violated the United States Constitution’s clause against an establishment of religion.

On May 20, 2011, a group of 10 former Freedom Riders, Black and white, returned to Montgomery after 50 years to be hailed as civil rights heroes and to dedicate a museum at the old bus station where they had been beaten by a white mob.

Mr. Patterson was there to greet them. In 1961, he had called them agitators and fools. A half-century later, he joined in praising the stalwarts. “It took a lot of nerve and guts to do what they did,” he said.