Home » Politics » In Georgia, a Republican Feud With Trump at the Center

ATLANTA — There is no worse time for Georgia Republicans to be engulfed in a civil war. Their presidential candidate just narrowly lost the state, which has long been a conservative safe space, while two competitive runoff races are looming in January that could determine control of the U.S. Senate — and the direction of the country for the first part of this decade.

And yet the war has come, full of double-crossing, internecine accusations of lying and incompetence, and a bitter cleavage into factions over the question of how much fealty should be shown to President Trump — and the extent to which Republicans should amplify his false argument that the election in this fast-changing Southern state was stolen from him.

Republicans in Georgia and elsewhere are now faced with a stark choice. They can stick by Mr. Trump and his rash claims of fraud, and risk alienating moderate voters who may have had their fill of Trumpism — including the thousands who helped turn Georgia blue this month. Or they can break with Mr. Trump, invite his wrath and risk throwing the political equivalent of a wet blanket on conservative turnout for the Senate runoffs in January.

“This is clearly a divisive issue for Republicans in Georgia,” said Ashley O’Connor, a Republican strategist. “But the balance of the Senate is at stake here for Republicans so everybody would do better reminding themselves what’s at stake.”

The hostilities here involve a tangle of overlapping rivalries among statewide and national Republicans. Last week, in an extraordinary intraparty attack, the incumbent senators facing tougher-than-anticipated runoffs, Kelly Loeffler and David Perdue, released a joint statement calling on Brad Raffensperger, the Republican secretary of state, to step down. They said the election he oversaw — one in which Mr. Trump trailed Joseph R. Biden Jr. by about 14,000 votes — was an “embarrassment.” Ms. Loeffler and Mr. Perdue are both ardent Trump supporters.

Mr. Raffensperger defended the integrity of the election process, and suggested that none of this would be an issue if the Republican candidates had managed to do better at the polls. He also lashed out at Representative Doug Collins, a Republican who is heading up Mr. Trump’s recount effort, labeling him a “liar.” Mr. Collins responded by calling Mr. Raffensperger incompetent. 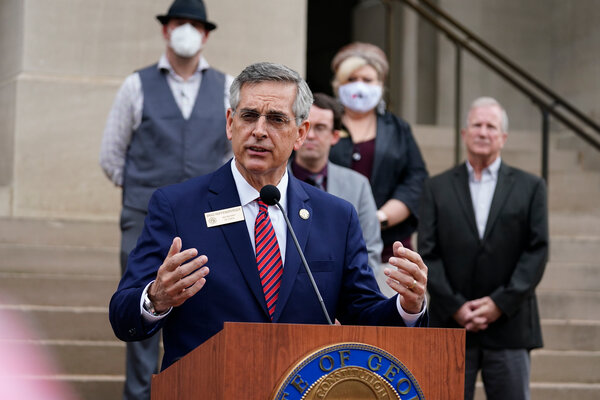 The acrimony has burst past state lines and involved Mr. Trump and one of his staunchest allies, Senator Lindsey Graham of South Carolina. Mr. Trump called Mr. Raffensperger a “RINO,” or Republican in Name Only, while continuing to make false claims about voting integrity in Georgia; along the way he tossed a few barbs at the state’s Republican governor, Brian Kemp, Mr. Trump’s ally and sometime-scapegoat.

And Mr. Raffensperger told The Washington Post on Monday that Mr. Graham had asked him about ways that ballots could potentially be disqualified, which the secretary of state portrayed as pressure to look harder for evidence of fraud. (Mr. Graham called that assertion “ridiculous.”)

The feuding in Georgia has provided a messy backdrop for Mr. Trump’s broader efforts to undermine the electoral system as a whole. It has also complicated the re-election efforts of Mr. Perdue and Ms. Loeffler.

As long as both senators promote Mr. Trump’s conspiracy-mongering and refrain from acknowledging Mr. Biden’s victory, they are denied perhaps their best message to the state’s centrist swing voters: that Georgians can elect them as a check on Mr. Biden and prevent any liberal excesses that would come with full Democratic control of the capital.

What’s alarming to national Republicans is that the awkwardness in Georgia may only offer a preview of what the party might confront during the post-Trump era, which itself may be a misnomer.

With Mr. Trump signaling that he intends to try to keep control of the party and potentially seek the White House again in 2024, G.O.P. lawmakers and operatives are bracing for a period in which they’re effectively handcuffed to a former president who demands veto power in intraparty elections.

“It’s very possible, if not likely, that Trump will be in a kingmaker position for the 2022 primaries,” said Todd Harris, a longtime Republican ad-maker. “Whether people like it or not, this is Trump’s party. And nothing that happened on Election Day or since then has done anything to change that.”

While some Republicans, especially in the country’s reddest precincts, are delighted about the prospect of Mr. Trump running the party from tropical exile at Mar-a-Lago, those who represent voters exhausted by the soon-to-be-former president are eager to move on.

“I want to be a party of ideas and values,” said Representative Don Bacon of Nebraska, who won re-election even as his Omaha-based district turned sharply against Mr. Trump. “We should not be a party of any one person. Unless it’s Lincoln.”

After Georgia’s senate runoffs, the first test of Mr. Trump’s clout will come in another Southern state that has already undergone a similar political metamorphosis: Virginia. Republicans there are hoping to reclaim the governorship next year. But they are nervous their eventual nominee may have to demonstrate fidelity to the former president in a fashion that could ensure success in a primary but torpedo their general election prospects in a state Mr. Biden carried by 10 points.

More significant is 2022, when dozens of governorships, as well as control of the House and Senate, will be at stake. Republicans are concerned Mr. Trump will exact revenge on incumbents who have demonstrated insufficient loyalty to him — fears he fueled this week when he lashed out at Gov. Mike DeWine of Ohio, who used a national TV appearance to acknowledge that Mr. Biden had won the election.

“Who will be running for Governor of the Great State of Ohio?” Mr. Trump asked on Twitter, all but inviting a primary challenge against a broadly popular and decades-long officeholder in the state. “Will be hotly contested.”

It’s Georgia, though, where Republicans are currently having to eggshell-walk around their impetuous leader.

“Mitch knows he can’t take Trump off the table there,” Scott Reed, a longtime G.O.P. strategist, said of the calculations of Mitch McConnell, the Senate majority leader. “He needs him to energize the MAGA crowd.”

In Georgia, opinions are split over whether the intraparty feud will drag down Mr. Perdue and Ms. Loeffler. There is a fear among some Republicans that disparaging the voting system might convince some Trump voters not to turn out, on the belief that their vote will not count. Others fear that Mr. Trump will continue to make a spectacle and dampen the enthusiasm of well-educated, high-propensity voters in the suburbs who have wearied of four years of tumult.

“You hate it when a family discussion gets outside the confines of the family,” said former Representative Jack Kingston, a Georgia Republican who served from 1993 to 2015. But Mr. Kingston and others believe that the party will heal up, and the rifts would soon become irrelevant as Republicans unify around the fear of a Democrat-run Senate.

“I don’t think it is something where people are going stay at home or vote for Jon Ossoff,” Mr. Kingston said, referring to Mr. Perdue’s Democratic challenger. “I just don’t see that happening. I think the Republican base is pretty riled up.”

Georgia is currently conducting an audit that involves counting all five million votes cast across 159 Georgia counties. Elections officials have said that only minor discrepancies have been discovered, with the exception of Floyd County, in the northwest, where about 2,600 uncounted votes had been discovered. The secretary of state’s office announced on Tuesday that it had found another discrepancy, in Fayette County, where the recount revealed 449 additional votes for Mr. Trump, narrowing Mr. Biden’s lead to 12,929 votes.

The Trump campaign issued a statement Tuesday pointing to these problems to say that “Recent revelations from Georgia’s ongoing statewide recount have shown that President Trump was absolutely correct to raise concerns.” Neither of the two discrepancies, however, is expected to change the outcome — a victory for Mr. Biden — when the recount is complete at midnight Wednesday.

While Mr. Trump remains the most popular Republican politician today, it is unclear how long that popularity will last, which makes it difficult to say now whether the governor, Mr. Kemp — who has remained a Trump fan through past bouts of presidential criticism — or Mr. Raffensperger will have a hard time with the Republican base when they are up for re-election in 2022.

“I think that the rift between those who are aligned with Trump and not aligned with Trump is going to end up playing itself out in some way shape or form but I think right now Trump and his allies have the upper hand,” said Andra Gillespie, an associate professor of political science at Emory University in Atlanta. “The question is: how long will their control of the Republican Party last?”