A study by a liberal group found a reverse coattails effect in 2020: Down-ballot candidates may have helped elect President Biden, rather than the other way around. 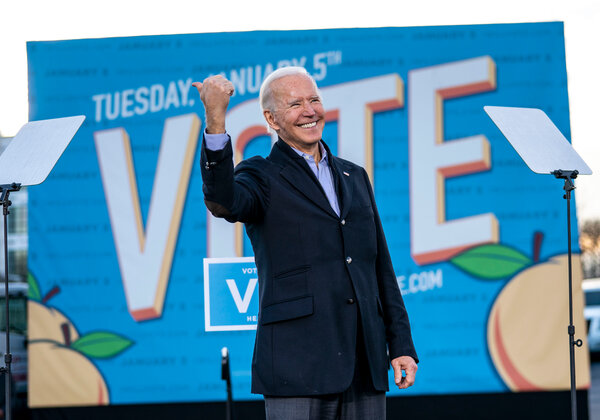 Ebony Carter faced an uphill climb when she decided to run for the Georgia State Senate last year. Her deeply Republican district south of Atlanta had not elected a Democrat since 2001, and a Democrat hadn’t even bothered campaigning for the seat since 2014.

State party officials told her that they no longer tried to compete for the seat because they didn’t think a Democrat could win it. That proved correct. Despite winning 40 percent of the vote, the most for a liberal in years, Ms. Carter lost.

But her run may have helped another candidate: Joseph R. Biden Jr.

The president, who eked out a 12,000-vote victory in Georgia, received a small but potentially important boost from the state’s conservative areas if at least one local Democrat was running in a down-ballot race, according to a new study by Run for Something, an organization dedicated to recruiting and supporting liberal candidates. That finding extended even to the state’s reddest districts.

The study showed a reverse coattails effect: It was lower-level candidates running in nearly hopeless situations — red districts that Democrats had traditionally considered no-win, low-to-no-investment territory — who helped the national or statewide figures atop the ballot, instead of down-ballot candidates benefiting from a popular national candidate of the same party.

“The whole theory behind it is that these candidates are supercharged organizers,” said Ross Morales Rocketto, a co-founder of Run for Something. “They are folks in their community having one-on-one conversations with voters in ways that statewide campaigns can’t do.”

The idea isn’t new, but it is the first time that a comprehensive study has been done on the possibility of such a reverse coattails effect, and it comes as the Democratic Party ramps up its strategizing for the midterm elections next year.

How Coloradans in Congress voted on $2,000 stimulus checks

Biden Calls Chauvin Verdict a ‘Much Too Rare’ Moment of Justice