The moves appeared to be the most concrete action toward more economic aid since negotiations stalled nearly two months ago, but the sides remain far apart on price and short on time. 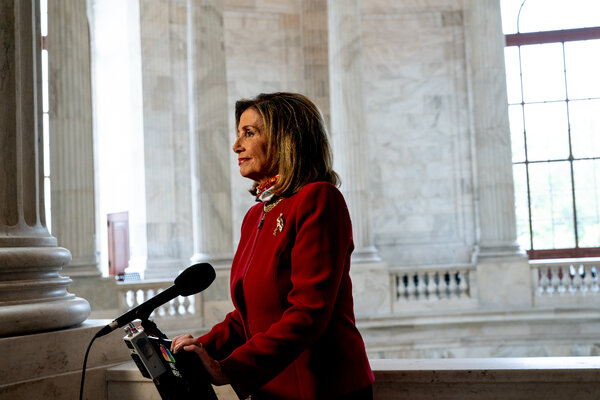 The release of the legislation came minutes before Speaker Nancy Pelosi of California and Steven Mnuchin, the Treasury secretary, spoke by phone Monday evening, as the pair seeks to end the impasse over another coronavirus relief package. The two agreed to speak again on Tuesday morning, said Drew Hammill, a spokesman for Ms. Pelosi.

The moves appeared to be the most concrete action toward another stimulus bill since negotiations stalled nearly two months ago. But the sides remain far apart on an overall price tag, and with just over a month before Election Day, lawmakers and aides in both chambers warned that the time frame for striking a deal was slim.

Absent an agreement with the administration, the House could vote as early as this week to approve the legislation, responding to growing pressure for Congress to provide additional relief and quelling the concerns of moderate lawmakers unwilling to leave Washington for a final stretch of campaigning without voting on another round of aid. But at roughly $1 trillion more than what Mr. Mnuchin has signaled the White House is willing to consider, the package is likely just a starting point, all but guaranteed to be rejected by the Republican majority in the Senate should the House pass it in its current form.

To slim down the new measure, which contains many of the provisions House Democrats included in their initial $3.4 trillion legislation that they approved in May, lawmakers curtailed how long some provisions would last. They slashed their original proposal of nearly $1 trillion for state, local and tribal governments in half, and cut the aid for the beleaguered U.S. Postal Service to $15 billion from $25 billion.