The passage of the bill, which appeared dead just weeks ago, would cap a Democratic effort to deliver on major components of President Biden’s agenda. 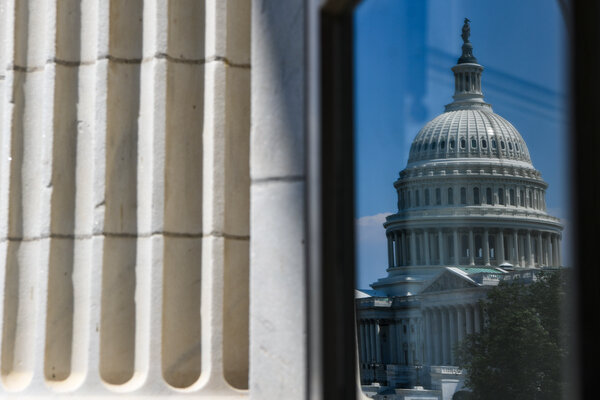 WASHINGTON — The House was poised on Friday to pass major components of President Biden’s domestic agenda, capping Democrats’ effort to push into law a climate, tax and health care package that appeared dead just weeks ago.

Lawmakers are set to return from their scheduled summer recess for one day to vote on the legislation, which faces unanimous Republican opposition. Mr. Biden is expected to sign the measure soon after. The Senate approved it on Sunday.

The legislation would pour more than $370 billion into climate and energy programs aimed at helping the United States cut greenhouse gas emissions by an estimated 40 percent below 2005 levels by the end of the decade. It would also extend for three years expanded subsidies under the Affordable Care Act, as well as fulfill a long-held Democratic goal to lower the cost of prescription drugs by allowing Medicare to directly negotiate prices and capping the annual out-of-pocket cost for recipients at $2,000.

The package would be financed largely by tax increases, including a new tax on company stock buybacks and a 15 percent corporate minimum tax for wealthy companies. Initial analyses of the legislation found that it could reduce the nation’s deficit by as much as $300 billion over a decade.

“This life-changing legislation increases the leverage of the people’s interest over the special interest,” Speaker Nancy Pelosi of California wrote this week in a letter to her colleagues. “This bill,” she added, “makes a tremendous difference at the kitchen table of America’s families.”

A new proposal. The $370 billion climate, tax and health care package that Senate Democrats passed on Aug. 7 could have far-reaching effects on the environment and the economy. Here are some of the key provisions:

Auto industry. Currently, taxpayers can get up to $7,500 in tax credits for purchasing an electric vehicle, but there is a cap on how many cars from each manufacturer are eligible. The new bill would eliminate this cap and extend the tax credit until 2032; used cars would also qualify for a credit of up to $4,000.

Energy industry. The bill would provide billions of dollars in rebates for Americans who buy energy efficient and electric appliances. Companies would get tax credits for building new sources of emissions-free electricity. $60 billion is set aside to encourage clean energy manufacturing and penalties for methane emissions that exceed federal limits starting in 2024.

Health care. For the first time, Medicare would be allowed to negotiate with drugmakers on the price of some prescription medicines. The bill would also extend subsidies available under the Affordable Care Act, which were set to expire at the end of the year, for an additional three years.

Tax code. The bill would introduce a new 15 percent corporate minimum tax on the profits companies report to shareholders, applying to companies that report more than $1 billion in annual income but are able to use credits, deductions and other tax treatments to lower their effective tax rates. The legislation would bolster the I.R.S. with an investment of about $80 billion.

Low-income communities. The bill would invest over $60 billion to support low-income communities and communities of color that are disproportionately burdened by climate change. This includes grants for zero-emissions technology, as well as money to mitigate the negative effects of highways and other transportation facilities.

Fossil fuels industry. The bill would require the federal government to auction off more public space for oil drilling and expand tax credits for coal and gas-burning plants that rely on carbon capture technology. These provisions are among those that were added to gain the support of Senator Joe Manchin III, Democrat of West Virginia.

The passage of the legislation would cap an arduous stretch of negotiations for Democrats. For more than a year, they labored to find a compromise that could not only appease a left flank eager to pass an expansive plan that would transform the nation’s social safety net, but that would also secure the votes of key centrist holdouts reluctant to endorse billions in new spending as inflation climbed.

The bill falls far short of the $2.2 trillion Build Back Better Act, which Ms. Pelosi wrangled to passage in the House in November. That bill included far more substantial changes to the tax code, as well as billions of dollars to create a federal paid leave program, provide support for most families with children, and expand housing, home care and public education. It stalled in the Senate a month later, when Senator Joe Manchin III of West Virginia, a centrist Democrat, rejected it as exorbitant and walked away from talks.

But the final product, called the Inflation Reduction Act, is a significant victory for Democrats just months before they defend their narrow congressional majorities in the November midterm elections. In her letter, Ms. Pelosi acknowledged that several priorities had been dropped to assemble a narrower package and vowed that “we must never give up that fight — and will continue it in future legislation.”

At one point, as talks between Mr. Manchin and Senator Chuck Schumer of New York, the majority leader, faltered last month, Democrats grappled with the prospect of enacting just a health care package. Once a deal that included climate priorities and some tax increases was struck, they rallied behind the plan.

“While we are heartbroken to see several essential pieces on the care economy, housing and immigration left on the cutting room floor — as well as a successful Republican effort to remove insulin price caps for those with private insurance — we know that the Inflation Reduction Act takes real steps forward on key progressive priorities,” Representative Pramila Jayapal of Washington, the chairwoman of the Congressional Progressive Caucus, said in a statement after Senate passage of the measure.

SNP Brexit panic: Boris told to take no deal off the table – ‘Rule this out NOW!’