The Tories took the constituency for the first time since it was created almost 50 years ago, with Jill Mortimer defeating Labour candidate Dr Paul Williams by 6,940 votes.

Giving a victory speech after the result, she said: “I am incredibly proud of the campaign my team and I have run in Hartlepool – it is based on local issues of real concern to the community here, and I would like to thank all of the people of this great town who have responded so positively to it.

“I’m also immensely proud to be the first Conservative MP in Hartlepool for 57 years.

“Not only that, I am the first woman ever to be elected as MP for this town.

“It is a truly historic result and a momentous day.

“Labour have taken people in Hartlepool for granted for too long.

“I heard this time and time again on the doorstep and people have had enough and now, through this result, the people have spoken and have made it clear it is time for change.”

“We’re delighted that the people of Hartlepool have put their faith in Jill and the Conservatives to deliver on their priorities: to bring the change, investment and jobs Hartlepool deserves.”

Both Boris Johnson and Sir Keir made three visits to the North East town during the campaign.

Labour had faced criticism for picking a Remainer as its candidate in Hartlepool, which voted for Brexit by almost 70 percent in the 2016 referendum.

Reacting to the news, former BBC presenter Andrew Neil tweeted: “16% swing from Labour to Tory, biggest swing to government party in a by-election in living memory.”

BBC Newsnight’s policy editor Lewis Goodall said: “Lots of talk about the date or the candidate being the problem. Misses the point.

“We’re talking about a much deeper structural change and political failure.”

The result comes after a shadow cabinet member admitted Labour was “not close to winning this”.

Shadow transport secretary Jim McMahon, who led Labour’s campaign to hold the North East town, said it looked clear the party had not “got over the line”.

Mr McMahon told Sky News: “It is pretty clear in the way the ballots are landing that we are not close to winning this despite our best endeavours.

“We haven’t got over the line, that’s quite clear from the ballots.”

Early results in council contests elsewhere also appeared to show voters deserting Labour, as ballots continue to be tallied up across England, Scotland and Wales following the Super Thursday polls – the largest test of political opinion outside a general election.

A Labour source said Sir Keir would “take responsibility for these results” as the party looked on the verge of losing Hartlepool.

The source said: “We’ve said all along the North East and the Midlands would be difficult.

“We also said the places declaring Thursday would be particularly difficult.

“But the message from voters is clear and we have heard it – Labour has not yet changed nearly enough for voters to place their trust in us.

“We understand that. We are listening. And we will now redouble our efforts.

“Labour must now accelerate the programme of change in our party, to win back the trust and faith of working people across Britain.

The party clung onto the seat despite other bricks in Labour’s so-called red wall crumbling – in part due to the Brexit Party splitting the Tory vote. 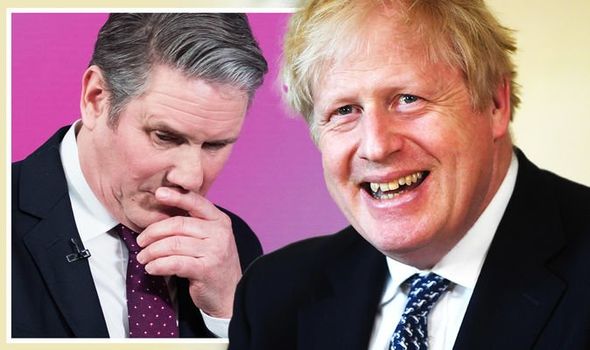 Fishing SELL OUT! Brexiteer in furious fisheries outburst as she calls for MPs to ‘RIOT’