WASHINGTON — For the birthdays of her Supreme Court clerks, Justice Ruth Bader Ginsburg would often bring a cake baked by her husband, Marty, a tax lawyer and deft chef, serving it at a celebration in her chambers.

When the clerks had children, the justice would send onesies or tiny T-shirts emblazoned with “R.B.G. grandclerk.”

She played matchmaker for a few, doled out job recommendations and medical referrals to many, and officiated some of their weddings.

As the nation and its leaders began a period of public mourning on Wednesday for Justice Ginsburg — hailing her as a legal giant, a trailblazing woman and a fierce champion of equality — her former clerks, the exclusive group of people who worked by her side during her years as a judge and justice, remembered her in more personal ways, as an exacting mentor who treated them like family.

Nearly all of the justice’s former law clerks, from the Supreme Court and U.S. Court of Appeals for the District of Columbia Circuit, lined the steps of the Supreme Court on Wednesday morning as honorary pallbearers. Many traveled far to pay their final respects to a woman they revered.

“It was our solemn duty to stand in honor of her and serve her this one last time,” said Amanda L. Tyler, a professor at the law school of the University of California, Berkeley, who served as an honorary pallbearer. “We came out en masse to help her one final time.”

Each year, Justice Ginsburg selected about four or five people — who were usually not long out of law school — for the coveted privilege of serving as her clerks. Before their interviews, those vying for the post were often counseled to expect long pauses from the soft-spoken justice, who was known for her deliberateness with her words.

But those interviews often became informal and personal. Kelsi Corkran, who heads the Supreme Court practice at the law firm Orrick, recalled that hers had touched on the paintings in Justice Ginsburg’s office and Ms. Corkran’s children.

“For me to show up with two young children and for the justice to not see that as an impediment for me to fully do the work was certainly a sign of the progress that she had brought forth through her work,” Ms. Corkran said, noting that Justice Ginsburg had been rejected for a clerkship with Justice Felix Frankfurter because she was a mother.

Neil S. Siegel, a professor at the Duke University School of Law, recalled that during his interview with Justice Ginsburg, he mentioned an author whom he had read and who happened to be speaking at the Supreme Court Historical Society that evening. Justice Ginsburg invited Mr. Siegel to join her at the event with her husband, and at the end of the night, the justice offered Mr. Siegel the clerkship.

In the many hours she shared with her clerks, Justice Ginsburg developed a personal bond that extended beyond their professional relationship. Many grew to know her husband well, too. 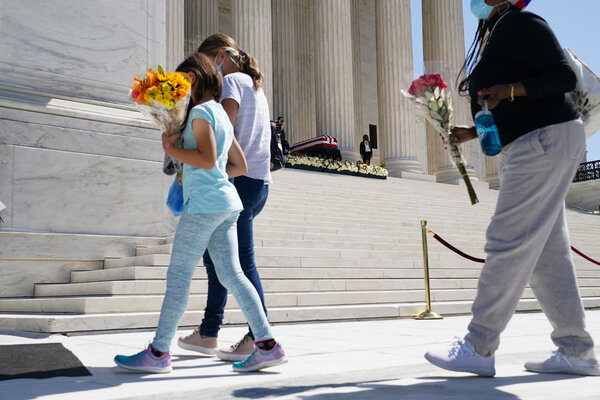 Paul S. Berman, a professor at the George Washington University Law School who clerked for Justice Ginsburg beginning in 1997, remembered one day when she buzzed him on the intercom, which usually meant she had a request. Instead, she was calling because she had found out that Mr. Berman had begun dating a clerk who worked in another justice’s chambers.

“I didn’t know you had a special friend at the court,” Justice Ginsburg told him. “You must have her up for tea.”

The next week, Justice Ginsburg hosted Mr. Berman and his new girlfriend in her chambers for high tea, with a tablecloth and fine china. Naturally, he said, she officiated their wedding several years later.

The warmth and generosity came with high standards, former clerks said in interviews, recounting the professional rigor applied by Justice Ginsburg, who was a stickler for detail. As part of their duties, clerks were expected to draft opinions with triple spacing, leaving ample room for her meticulous editing and handwritten comments. They often spent late nights at the justice’s elbow as she reviewed draft after draft.

“Get it right and keep it tight” was one of the justice’s catchphrases, said Ruthanne Deutsch, an appellate lawyer who served as a clerk to Justice Ginsburg from 2007 through 2008. The job was a “master course in how to write,” she said.

“It meant an excruciating attention to every word to make sure that there was no excess — that every word, every phrase, every paragraph in an opinion had a purpose,” Ms. Deutsch added.

Some clerks stayed with the justice late into the night while she toiled over opinions. But Joseph Palmore, a clerk from 2001 to 2002, had a baby at home when he worked for Justice Ginsburg; she often encouraged him to return home for dinner to spend time with his family.

Shortly after Trevor W. Morrison learned that he had been selected for a clerkship with Justice Ginsburg, he mailed her a baby announcement. She responded by sending one of her famous “R.B.G. grandclerk” outfits.

“She treated her clerks and their families as an extended family,” said Mr. Morrison, who is now the dean of New York University School of Law.

Since then, Mr. Morrison often called Justice Ginsburg when he faced a crossroads in his career, as so many others did.

Ryan Park, who is now the solicitor general of North Carolina, said that he approached Justice Ginsburg as he pondered the next steps in his career after his clerkship ended. She supported him when he decided to be a stay-at-home father, he said.

Many of the former clerks would go on to argue in front of the Supreme Court. Each of the seven times that Elizabeth Prelogar, a litigator who clerked for the justice between 2009 and 2010, did so, Justice Ginsburg would offer a smile.

Ms. Prelogar said she felt the “warmth radiate from her,” even from the Supreme Court bench.

During the regular check-ins she had with former clerks, Justice Ginsburg often asked about their children, with whom she had forged her own bonds. When Mr. Siegel’s daughter visited Washington with her middle-school class, the justice hosted the students in the courtroom. She offered advice to Mr. Morrison’s daughter, who was matriculating at Cornell, Justice Ginsburg’s undergraduate alma mater.

In these interactions, she would “morph into grandmother mode,” Ms. Tyler said.

Justice Ginsburg held highly attended reunions for her clerks every few years. While some other justices hosted black-tie affairs solely for the clerks and their partners, she chose to include her clerks’ families in the festivities, Ms. Tyler said.

“That was who she was,” she added. “Family life was central to who she was.”