Georgia’s 159 counties were poised on Thursday to begin recounting nearly five million ballots in the presidential election, but confusion surrounded the proceedings even as county officials raced to get ready.

A day after Brad Raffensperger, Georgia’s Republican secretary of state, described the process as a hand recount, his subordinates said Thursday that it was technically an audit and not a recount, though it would have largely the same effect. Counties are being told to audit every vote cast and tally a new result by midnight on Wednesday, two days before the state’s Nov. 20 deadline to certify its results.

But after that, the Trump campaign can still request an official recount, if the result is within half a percentage point. That means President Trump could effectively get three bites at the apple — or the peach, as it were — in Georgia. Still, with the margin in the first tally giving Joseph R. Biden Jr. an edge of more than 14,000 votes, election observers do not believe any number of counts will alter the outcome.

Counties will begin their audits on Friday morning and are required to finish up by midnight on Nov. 18. Auditors from the counties’ elections divisions will sit at tables and count the ballots.

Most of what will be reviewed will be straightforward: printed copies of in-person votes cast on electronic machines. But county officials will also review absentee ballots marked by hand. If they find ambiguities, the ballots will be referred to a three-person adjudication panel in each county made up of a Democratic representative, a Republican representative and a county official who will break ties.

The situation in Georgia grew more complicated on Thursday when Mr. Raffensperger went into quarantine after his wife tested positive for the coronavirus; as of Thursday afternoon she was planning to take a second test. Jordan Fuchs, a deputy secretary of state, said that Mr. Raffensperger and several of his senior staff members also planned to get tested on Thursday.

The state’s use of an audit to re-tally all of the votes that were cast is unusual, though the secretary of state’s office believes it has the legal authority to do so. Audits are typically carried out for a portion of the vote to verify the results.

“This will be the largest hand re-tallying by an audit in the history of the United States,” Gabriel Sterling, a top deputy in the secretary of state’s office, said at a news conference on Thursday. “We understand that. It is a heavy lift.”

“If they are saying that this is the audit, the law does not permit them to take audit results and make them official,” said Marilyn Marks, the director of the Coalition for Good Governance, a voting rights group. “Clearly, the secretary is responding to political pressures rather than following the intent of the law.” 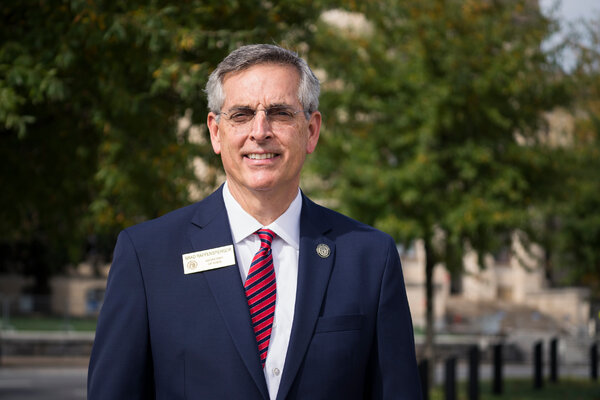 Paige Hill, a spokeswoman for the Biden campaign, said in a statement that “historically only races with exceptionally close margins have any likelihood of being overturned,” adding: “President-elect Biden’s margin is now at more than 14,000 votes. At the end of this hand recount process, we are confident the Election Day result will be reaffirmed: Georgians have selected Joe Biden as their next commander in chief.”

Mr. Raffensperger’s office has come under considerable pressure. He initiated the audit after Mr. Trump’s campaign demanded a hand recount. Georgia’s two senators, Kelly Loeffler and David Perdue, who are both fellow Republicans, also called on Mr. Raffensperger to resign this week, under pressure from Mr. Trump. The president and his campaign are spreading misinformation and conspiracy theories about the election, falsely claiming that it was rigged.

Mr. Sterling addressed some of the conspiracy theories on Thursday.

“I know that there’s many other bits of misinformation out there, talking about flipping votes and changing votes,” he said. “Anybody claiming that things are being flipped by a super secret computer developed by the C.I.A. is just not speaking — is speaking nonsense.”

He also said the news media had “mischaracterized the rationale behind” the audit “as caving to Trump and their campaign,” saying, “There’s nothing that could be further from the truth.”