Some 8.7 million workers are now on furlough, up 300,000 over the past week and adding another £2.5 billion to the costs. Meanwhile, another 200,000 self-employed have claimed support from the state in the same period, taking the total to 2.5 million. The latest rise means around a third of the workforce is being propped up by the government.

The value of claims so far comes to £24.7billion – but experts have warned the final costs of the two schemes could top £100billion.

The latest figures released by HM Revenue and Customs showed 8.7 million on furlough from 1.1 million businesses as of Sunday, up from 8.4 million from a million firms seven days earlier.

The scheme sees the government underwrite 80 percent of the salaries of workers, up to a ceiling of £2,500 a month.

It is designed to prevent companies making mass redundancies, but there have been warnings that many are just treating it as a ‘waiting room’ for people who will later be laid off.

Chancellor Rishi Sunak said last week that businesses will have to start contributing to the furlough costs from August, in a bid to wean the economy off subsidies.

At that point their will need to pay National Insurance, while by October they will have to meet 20 percent of the furlough bill. The scheme is due to end entirely at that point. 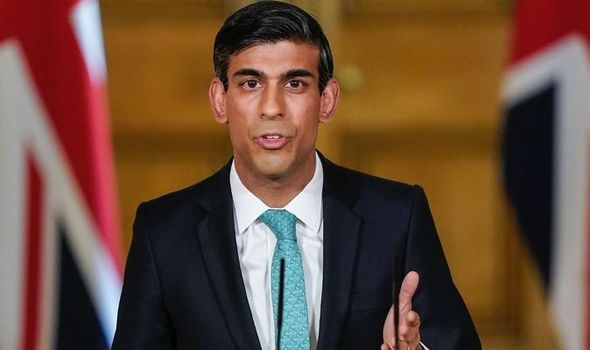 Employees will not see any reduction in their entitlement while the scheme is operating.

Staff will be able to return to work part-time without losing any furlough pay from next month.

HMRC also revealed that 2.5 million claims totalling £7.2 billion have been made under the self-employed scheme.

That was up from 2.3 million claims the previous week.

That bailout has been extended to provide one “final” grant next month, with the percentage of average monthly income covered being reduced from 80 percent to 60 percent.

Government figures also revealed that, up to last Sunday, nearly 750,000 businesses had been approved for loans worth more than £31.3 billion, £21.3 billion of it under the bounce back loan scheme which was used by 700,000 firms.

More than £8.9 billion has been lent to nearly 46,000 companies under CBILS, and a further £1.1 billion to 191 companies as part of CLBILS, aimed at larger businesses.

A further 74,000 firms have not yet been approved for the loans, which require minimum checks and can give a business up to £50,000 in their account within days.

The Government has promised to step in to pay back 100 percent of the loans handed out by high street lenders such as RBS and Bank of Scotland owner Lloyds Group as part of the bounce back scheme. It only guarantees 80 percent under CBILS and CLBILS.

Stephen Jones, Chief Executive of UK Finance, said: “These figures show that the banking and finance sector is committed to playing its part in helping businesses across the UK through these tough times.

“The amount of support available to firms affected by the Covid-19 crisis is unparalleled. Over £31 billion has been approved in government-backed lending schemes so far to almost 750,000 businesses, with a further £19 billion drawn under bank-arranged commercial paper facilities.

“But government-backed loans are not the only support the banking and finance sector has made available. Over the last few months, lenders have put in place a clear plan to support businesses in every region of the country, including through offering extended overdrafts, capital repayment holidays and asset-based finance to businesses that need support.

“It’s important to remember that any lending provided under government-backed schemes is a debt not a grant, and so firms should carefully consider their ability to repay before applying.”