Home » Politics » Fresh Off a Series of Victories, Biden Steps Back Onto the Campaign Trail

Embracing the role of the Democratic Party’s top campaigner will mean confronting Republican attacks when nearly three-quarters of voters say the country is heading in the wrong direction. 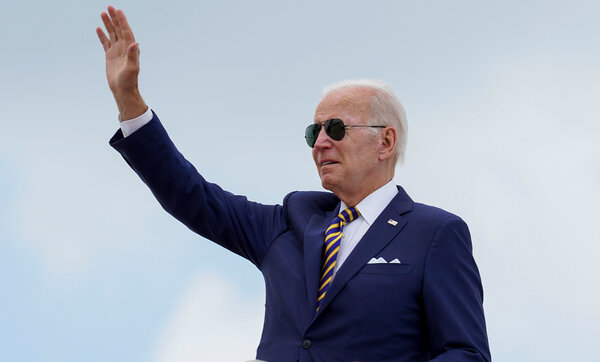 WASHINGTON — President Biden is preparing for one of the biggest tests of his presidency: Can he save his party?

Fresh off a series of legislative victories, the president kicks off the transition to campaign mode with a speech at a Democratic National Committee rally in Maryland on Thursday as he tries to preserve the party’s control of Congress in the midterm elections.

But his approval rating remains stubbornly low — lower, in some cases, than those of the candidates he hopes to help — and inflation remains stubbornly high. At 79, Mr. Biden is the oldest president in American history, which has become an increasingly uncomfortable issue for Democrats.

Embracing the role as his party’s top campaigner will mean directly confronting Republican attacks when nearly three-quarters of voters say the United States is heading in the wrong direction. It will also mean enduring cold shoulders from some Democratic candidates, a few of whom have made clear that they would prefer if Mr. Biden stayed away.

Representative Tim Ryan, an Ohio Democrat who is running for the Senate, cited scheduling conflicts when Mr. Biden was in his state in July, declining to appear beside the president even as Mr. Ryan — a moderate — is locked in one of the country’s most intense campaign battles in a critical swing state.

Mr. Ryan’s spokeswoman, Izzi Levy, said the president was not someone the congressman wanted to campaign with.

“We haven’t been interested in him or any other out-of-state surrogates,” she said, noting that Mr. Ryan’s approval rating in Ohio was higher than Mr. Biden’s. “I don’t see that changing anytime soon.”

In the West Wing, the president’s advisers are betting that he can help Democratic candidates despite the drags on his popularity. They note that gas prices have dropped for months; the coronavirus has receded, as Mr. Biden promised it would; and he has pushed through big Democratic wins on climate change, drug pricing and taxes on corporations. On Wednesday, he announced billions of dollars in student debt relief, a move that aides hope will energize young voters.

White House strategists also believe no one is better positioned to contrast the Democratic Party’s ideas with those of what the president calls the “ultra-MAGA Republicans,” a phrase meant to draw attention to the control that former President Donald J. Trump still wields and the number of Republicans who adhere to his election-denying conspiracies.

The F.B.I.’s search of Mr. Trump’s home in Florida this month to retrieve classified documents has heightened attention on him at an opportune time for Mr. Biden, raising new questions about the former president’s norm-busting — and possibly illegal — behavior. But it has also made it tougher for the White House’s messages to break through the barrage of Trump-related news coverage.

In a strategy memo released by the White House this month, advisers promised that Mr. Biden, Vice President Kamala Harris and members of the cabinet would fan out across the country for events intended to promote the president’s accomplishments.

The memo, from Jen O’Malley Dillon, a deputy White House chief of staff, and Anita Dunn, a top communications adviser, said the president would deliver two complementary messages: a reminder that Democrats “beat the special interests” in passing legislation that nearly all Republicans opposed and an attack on the extreme policies embraced by Mr. Trump and his allies.

Mark Warner, a ‘Business Guy’ Democrat, Lands Back in the Fray