The “open, original, and optimistic” festival officially still has no name and will take place across the country in 2022. The final ten winning collectives were cut down from a shortlist of 30 and show off a broad range of the UK’s strengths.

Exhibitions included in the festival will bring together more than 500 artists, scientists, technologists, engineers and mathematicians.

Culture Secretary Oliver Dowden said: “These ten showstopper projects will wow audiences in towns and cities across the country, and show off the UK and its creative genius to the world.

“Alongside the Commonwealth Games, and Platinum Jubilee, they will make 2022 a year to remember, bringing the nation together as we build back stronger from the pandemic.”

Martin Green, who was head of ceremonies for the London 2012 Olympic and Paralympic Games and also director of Hull’s 2017 City of Culture programme, has been appointed the festival’s chief creative officer. 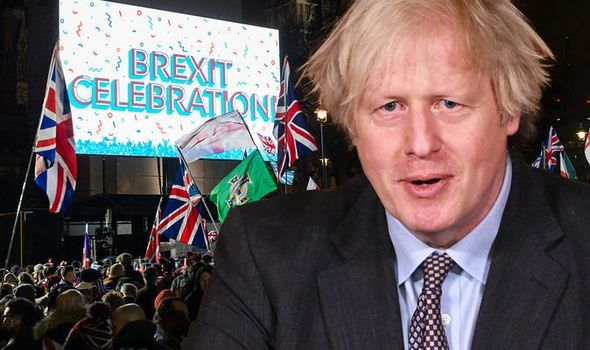 While those critical of the ceremony have given it the “Festival of Brexit” nickname, Mr Green has praised ministers for staying out of the artistic process – despite footing the bill.

He said: “The Government committed to flinging this out there and let the creatives of the UK tell us what this festival could and should be.”

The artistic freedom given the to festival has led to some strange and quirky entries.

The “Newsubstance” collective is described as “a physical manifestation and celebration of the British weather”, while the Assemble +8 collective is billed as “an immersive experience exploring the wonder of the human mind through architecture, neuroscience, technology, light and sound”.

Brexit on the brink: UK hits out at EU stubbornness pushing no deal ‘very difficult!’

SNP Brexit panic: Boris told to take no deal off the table – ‘Rule this out NOW!’