Greenpeace activists are furious at seven Tory policies the environmental group claim clash with its manifesto from 2019 after interrupting Liz Truss’s keynote speech at the Conservative Party conference. The eco-activists momntarily halted the Prime Minister’s televised speech in Birmingham to denounce her “shredding” her party’s general election manifesto from three years ago.

Greenpeace UK head of public affairs Rebecca Newsom and policy officer Ami McCarthy stood facing Ms Truss close to the front rows of the hall where her Cabinet members were seated, holding up a banner and demanding to know: “Who voted for this?”.

The global campaigning group said an analysis has identified “at least seven areas across environmental protection, climate action, workers’ rights and tackling inequality where policies either confirmed or being considered by Truss and her ministers are at odds with the 2019 Conservative manifesto”.

Greenpeace added they include pledges to have the “‘most ambitious environmental programme of any country on earth’, confirm a moratorium on fracking and ‘raise standards in areas like workers’ rights, animal welfare, agriculture and the environment'”.

The others are to “reform farming subsidies so that landowners ‘farm in a way that protects and enhances our natural environment’, and ‘continue our efforts through the tax and benefits system to reduce poverty'”. 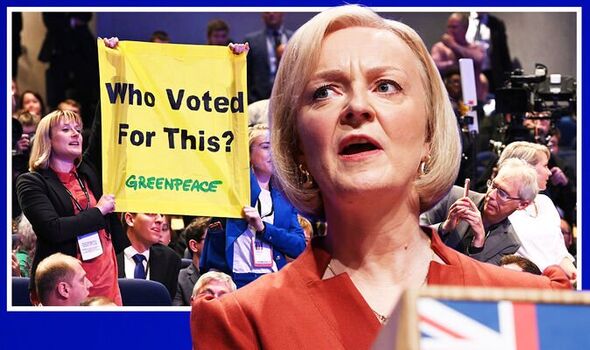 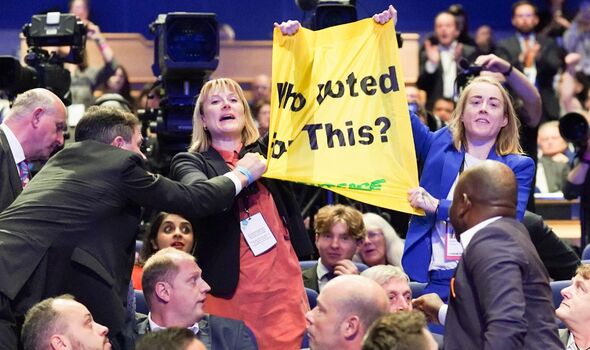 Greenpeace said the UK Government has instead “lifted the moratorium on fracking; set in train the potential abolition of hundreds of EU laws protecting wild places and regulating water quality, pollution and the use of pesticides; and dismissed environmental protections as ‘burdens’ in the Chancellor’s Growth Plan”.

It added the Government has “signalled a potential roll-back of new nature-friendly subsidies for farmers; and is considering not increasing Universal Credit in line with inflation”.

Ms Newsom said in a statement: “Who voted for this? In a healthy democracy, people should get the government programme they voted for, but Liz Truss is putting most of it through the shredder.

“People voted for strong action on climate, a fracking moratorium, world-leading environmental protections, and tackling poverty and inequality. What they’re getting instead is fracking, a potential bonfire of rules on wildlife and nature protection, and now the prospect of benefit cuts. 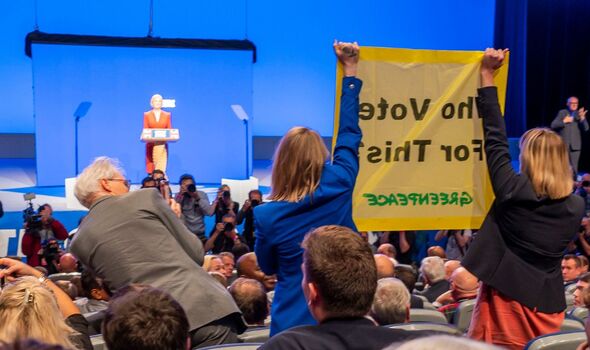 She added: “Broken promise after broken promise, the Prime Minister is quickly turning her party’s manifesto into the longest piece of false advertising ever written.

“Many will be left wondering whether her government answers to the public or to the hedge fund managers, right-wing think tanks and fossil fuel giants that are cheering it on.

“The Chancellor said the government is now listening. If so, they may want to pay attention to the widening chorus of leading businesses, energy experts, former Conservative ministers and even the US President telling them to go in the opposite direction.”

Ms Newsom, speaking to reporters after being thrown out of the speech, also said: “This year we really felt we needed to make an intervention because nobody actually voted for a lot of what Liz Truss and her Government are trying to do at the moment. 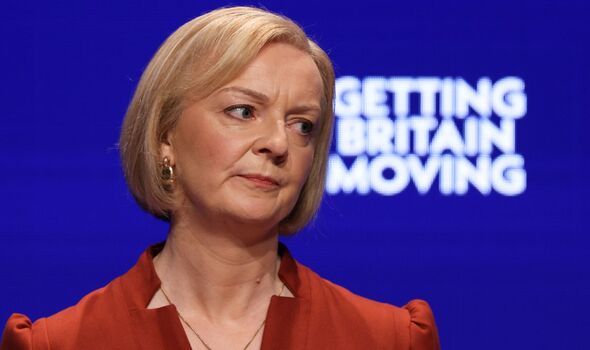 “There’s a whole host of things that the Conservative Government were elected to do in 2019 that they are simply not doing and we needed to take that message and represent the public and actually push for Liz Truss to remain true to what the public has actually asked her and her Government to do.”

As the protestors made their voices heard during her speech, Ms Truss could be heard saying “let’s get them removed”, before being roundly cheered and applauded by party members as the protesters were lead away.

She tried to make a joke of the protest as she continued with her speech, telling party members at the conference: “Now, later on in my speech, my friends, I am going to talk about the anti-growth coalition but I think they arrived in the hall a bit too early.”

Deputy Prime Minister Therese Coffey said it was “disappointing” that the speech had been interrupted, and told BBC’s Politics Live programme: “Dealt with, got on with it, and Liz showed her resolve.”

“And exactly the sort of anti-growth coalition which she’s concerned is holding our country back. It didn’t hold her back today I can tell you.”

£13.6bn lifeline for business to soften the blow of recession