Home » Politics » Duty or Party? For Republicans, a Choice on Whether to Enable Trump

For the next three weeks, the integrity of American democracy is in the hands of people like Norman D. Shinkle, a proud Michigander who has, until recently, served in relative obscurity on the state board that certifies vote results.

But now Mr. Shinkle faces a choice born from the national election turmoil created by President Trump, his preferred candidate, for whom he sang the national anthem at a campaign rally in Lansing last month.

Mr. Shinkle’s duty, as one of two Republicans on the four-member board, is to validate the will of Michigan voters and certify President-elect Joseph R. Biden Jr.’s victory ahead of the Electoral College vote on Dec. 14. Yet Mr. Shinkle is weighing whether to block certification at a board meeting scheduled for Monday, because of minor glitches that Mr. Trump and his allies have baselessly cast as evidence of widespread, election-invalidating fraud.

He said he had received hundreds of phone calls, emails and text messages from people for or against certifying. “You can’t make up your mind before you get all the facts,” he said.

That Mr. Shinkle is equivocating over a once-routine step in the process — despite all 83 state counties submitting certified results and Mr. Biden leading by 154,000 votes — shows the damage inflicted by Mr. Trump on the American voting process and the faith that people in both parties have historically shared in the outcome of elections.

But this is also a moment of truth for the Republican Party: The country is on a knife’s edge, with G.O.P. officials from state capitols to Congress choosing between the will of voters and the will of one man. In pushing his false claims to the limits, cowing Republicans into acquiescence or silence, and driving officials like Mr. Shinkle to nervous indecision, Mr. Trump has revealed the fragility of the electoral system — and shaken it.

At this point, the president’s impact is not so much about overturning the election — both parties agree he has no real chance of doing that — but infusing the democratic process with so much mistrust and confusion that it ceases to function as it should. 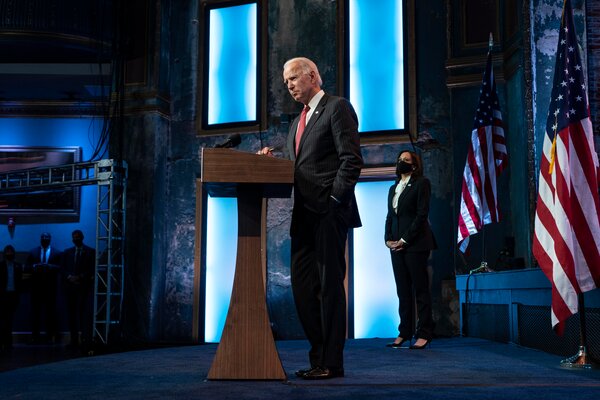 Under an unending barrage of fraud charges, voters might begin to question the legitimacy of elected officials from the rival party as a matter of course. And the G.O.P. risks being seen as standing for disenfranchisement and the undemocratic position that a high level of voting is somehow detrimental.

“What Trump is doing is creating a road map to destabilization and chaos in future years,” said Trevor Potter, a Republican who served as chairman of the Federal Election Commission in the 1990s. “What he’s saying, explicitly, is if a party doesn’t like the election result they have the right to change it by gaming the system.”

Mr. Trump’s gambit, never realistic to begin with, appears to be growing more futile by the day: Georgia became the first contested state on Friday to certify its vote for Mr. Biden, and the president continues to draw losing rulings from judges who bluntly note his failure to present any evidence of significant fraud or irregularities. Some fellow Republicans have started breaking with him, including Senator Mitt Romney, a Trump critic, who said the president was seeking to “subvert the will of the people,” and Senator Marco Rubio, who has acknowledged Mr. Biden is the president-elect.

On Friday, Republican lawmakers in Michigan also made clear, after meeting with Mr. Trump at the White House, that they would allow the normal certification process to play out without interfering, a potentially important signal ahead of the certification decision by the state elections board on Monday.

But on Saturday, the national and Michigan state party chairs issued a statement calling on the canvassing board to delay certification beyond its Monday deadline, to conduct an audit.

If Mr. Shinkle and his fellow Republican on the state board, Aaron Van Langevelde, were to oppose certifying the results, the board would deadlock.

Democrats and election lawyers say the courts would almost certainly force the board to complete the certification process, well in time for the Electoral College deadline next month. And Gov. Gretchen Whitmer could replace the board members if they defy a court order. But they also agree a deadlocked vote would give Mr. Trump a new opportunity to cast doubt upon the legitimacy of the election system and Mr. Biden’s win, while also prolonging his own legally dubious and, so far, failing attempt to convince Republicans who control the Statehouse to send pro-Trump delegates to the Electoral College.

Mr. Biden’s advisers say they are confident he will be awarded Michigan’s 16 Electoral College votes. But they acknowledge that the resulting national spectacle of court fights and new charges of fraud could prove “very harmful to the democratic process,” as Mr. Biden’s senior adviser, Bob Bauer, put it on Friday.

Civil rights leaders are especially alarmed at Mr. Trump’s efforts, given that most of them have falsely portrayed cities with large Black populations, like Detroit and Philadelphia, as so corrupt that their votes shouldn’t count. The argument that Mr. Trump’s attempt is all for show and will not succeed has done little to allay their concern.

“How is it ‘show’ when you’re basically systematically delegitimizing Black voters by your rhetoric,” said Sherrilyn Ifill, president of the Legal Defense and Educational Fund of the NAACP, which filed suit against Mr. Trump in Michigan on Friday for trying to disenfranchise Black voters (it did so on behalf of the Michigan Welfare Rights Organization and three residents). “How can that be anything but incredibly dangerous,” she added.

Ms. Ifill marveled at the position of the Republican Party, which was the nation’s first true civil rights party from the time of slavery through the late 1950’s, but now, under Mr. Trump’s unchallenged leadership, is effectively taking a stance against voting in entire cities and states.

“Civil rights haven’t moved — one party has moved, and that move has not been toward an embrace of democracy, it’s been away from it,’’ she said.

If Mr. Trump has shown nothing else, it is that he has made the Republican Party — which initially sought to resist him — his own. Though a handful of prominent Republicans have rebuked his refusal to cede power, far more, across all levels of government, have either tacitly or explicitly embraced a new standard in presidential elections: No winner can be declared until the full Electoral College certification process is complete, no matter how clear the results after Election Day.

Senator John Cornyn of Texas has acknowledged that he hadn’t “seen anything that would change the outcome” but told reporters on Thursday that Mr. Biden “is not president-elect until the votes are certified.” Mr. Cornyn congratulated Mr. Trump as president-elect on the day the major news organizations projected him as the winner in 2016.

Former Senator Jeff Flake, a staunch opponent of Mr. Trump, has urged Republicans to recognize Mr. Biden as president-elect. But he noted that Republicans worry about alienating Mr. Trump when they need his help for the upcoming Georgia runoffs, which will decide control of the Senate.

“If the Republicans abandon him, he may just abandon them,’’ he said.

Mr. Trump’s baseless argument that this is still an election up for grabs was prevalent in interviews with Republicans across the country on Friday.

Ginger Howard, a Republican national committeewoman from Georgia, said she still believed there were other avenues for Mr. Trump to pursue, despite the state’s certification of Mr. Biden as the winner there.

“There’s still recourse for sure, we’ve got some other options,” she said Friday without elaborating.

Some Republicans interviewed cited Mr. Trump’s legal challenges as grounds to believe the race was not over — even though judges have overwhelmingly rejected the president’s claims.

“There are questions regarding votes in several states, and until those matters have been fully litigated it would be premature for him to concede the election,” said Bruce Ash, a former Republican official in Arizona. Election officials across the country have said that there is no evidence of voter fraud or other irregularities that shaped the race’s outcome.

Senator Pat Toomey of Pennsylvania, a Republican, acknowledged in a statement to The Times that, “I have not seen any proof of widespread election fraud in Philadelphia or anywhere else in Pennsylvania.”

Yet he affirmed Mr. Trump’s right “to pursue litigation,’’ and would only go so far as to say “all signs indicate” that Mr. Biden was “likely” the next president.

Representative Seth Grove, a Republican in the Pennsylvania House of Representatives, declined on Friday to say that Mr. Biden had won the state. “The president’s just exercising his legal rights,’’ he said. “At the end of the litigation, it’s going to be Biden or Trump.”

In Pennsylvania, Mr. Trump has less opportunity to try to block certification than he does in Michigan and Wisconsin, where he has requested recounts in two counties. After the state’s 67 counties certify their votes — the deadline is Monday — they go to Secretary of the Commonwealth Kathy Boockvar, a Democrat, who has sole power to certify state results.

In Michigan, the president’s opportunity is limited if not nonexistent. On Friday, the State Bureau of Elections submitted its formal report recommending that the canvassing board affirm Mr. Biden’s win. Errors in some vote tabulations, which Mr. Trump has seized upon, were “attributable to human error,’' and “did not affect the actual tabulation of votes,” the elections bureau said.

That, said Christopher Thomas, an election adviser to the City of Detroit, means the canvassing board is obligated to affirm the vote. “The law doesn’t say you can decide or not — the law says if you get certified returns you go ahead and do what you’re supposed to do, ”he said.

As Monday’s vote approaches, Mr. Shinkle, the Republican board member, finds himself in a tight spot. In contrast to past cases, he said, “I’ve got many more so-called conservatives saying bad things about me.” He said he had some unresolved concerns about the vote totals in Detroit, where there were discrepancies with roughly 350 votes out of more than 250,000 cast.

His wife, Mary Shinkle, provided an affidavit for Mr. Trump’s federal lawsuit to stop the certification of results in Wayne County, which the campaign dropped on Thursday.

Mr. Shinkle said he is his own counsel, and that his primary goal is to be able to look in the mirror and feel good about his decisions. “I can’t let any other individual be involved in that decision,” he said. “I just have to do the best that I can based on what’s ethical and legal.”