The deputy Prime Minister lashed out at his counterpart for failing to support the RMT strikes last week. Dominic Raab accused deputy Labour leader Angela Rayner of being a champagne socialist for attending an opera festival. In the heat of the row, Mr Raab winked at Ms Rayner while Tory MPs jeered her.

One person Gully Foyle wrote: “Loving every minute of this isn’t he. Wiping the floor with Rayner.”

While Lisa Marshall said: “What was that wink?”

Alan Henning added: “I saw that wink, it was brilliant.” 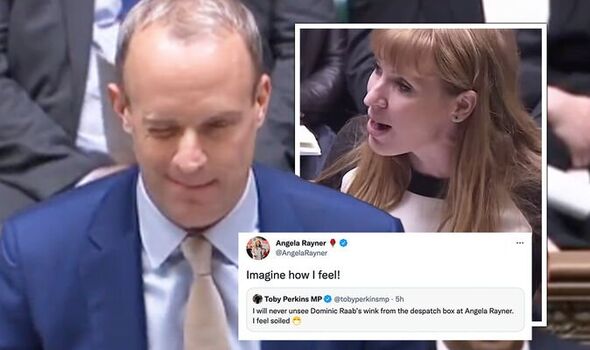 Ms Rayner quoted Mr Raab’s past view that people who use food banks “simply have a cash flow problem”, adding: “He doesn’t. He spent over a million pound in nine months on private jets, it shows how out of touch this Government is.

“At this rate, by 2030 a million more people will be using food banks. How many more working people will be pushed into poverty by his Prime Minister before he says enough is enough?”

The Deputy Prime Minister replied: “If the Labour Party, if she wants to help working people, they should be clear in standing up against these militant, reckless strikes.”

“She was at the Glyndebourne music festival sipping champagne, listening to opera. Champagne socialism is back in the Labour Party.”

Chris McDowall: Why is the Govt not sharing vaccination data with the public?