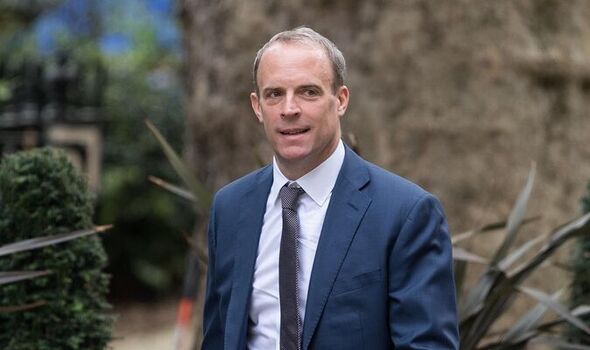 But as he donned a pair of boxing gloves to show off his impressive hook and thunderous jab on the punchbag, he declined our offer to haul warmongering Russian President Vladimir Putin, 69, into the ring for a few rounds. Mr Raab told us: “My sparring days are done! Putin is more of a judo man. You are not going to get me cage fighting with international politicians, I’m afraid!”

Yet expounding the virtues of sports like boxing at the Talbot and Brunswick Children’s Centre in Blackpool, Lancs, he showed off his pad work with onlooker Callum Penfolds, 18.

“I came from a middle-class background so I wouldn’t know any of the pressures that any of these young people face.

“But I trained at a karate club and boxing club and what I can tell you is you go there for the sport and eventually with the confidence and self-esteem it gives you, you learn so much more.

“It changes the way you look at life. If the middle-class boy from Buckinghamshire benefitted from it, you can imagine what that formula will do for a working-class kid in Blackpool or wherever it maybe.

“So, this works – it is classless. It doesn’t care about your background it just gives young people the opportunity and that is key to making our streets safer because that’s the way you cut crime.”

The new scheme sees the Government hand out £300m over the next three years to councils to prevent youth offending and help stop those already committing crimes from carrying out more serious offences.

Part of that funding is a ‘Turnaround’ £60million initiative – enabling experts to step in sooner and support wayward kids before they find themselves in the dock and is expected to help around 19,000 children.

“When we have ground-breaking team efforts – with the police, NHS, probation and local councils working together with great leadership – it can really help draw young people away from a life of crime.

“The boxing, the training and the mentoring they get is a really important antidote to the temptations of getting involved in gangs or drugs.

“That is crucial because it gives those young people a chance to stay on the straight and narrow, turn their lives around and fundamentally it avoids and cuts crime and means we leave the streets of Blackpool safer.

“So, I want to support these ground-breaking local initiatives, so we can spread best practice and support those initiatives that prevent young people getting involved in crime.

“It is a key part of our crime-fighting initiative along with additional police and tougher jail sentences.”

It’s estimated around 80 per cent of prolific offenders begin committing crimes as children, costing the economy nearly £17 billion per year.

Mr Raab added: “It is critically important to give those young people positive outlooks that drag them away from a potential life of crime.”

The senior cabinet minister also defended Boris Johnson’s Government against allegations it was failing to tackle the cost-of-living crisis.

He said: “The best defence in this global struggle with inflation is job security, so unemployment at a 50-year-low at 3.7 per cent is crucial. You can only deal with inflation with a healthy and growing economy.

“That leads to tax revenues which has allowed us to give over £20billion to help those struggling to make ends meet because of the cost of living.

“We have seen that with tax relief and cutting people’s national insurance and other packages but you cannot do that without a growing and dynamic economy.”

“This vital new funding will help us stop youth crime in its tracks by ensuring these children stay in education and rebuild ties with their families.”

While Youth Justice Board Chairman Keith Fraser said: “If our youth justice teams are well-resourced to help children and families, we all benefit – from healthier, happier, safer children and from safer communities with fewer victims.”

While the Prime Minister was still Mayor of London, I took him to Newham in east London to see Fight for Peace, a boxing and martial arts academy. I wanted to show him the power of sport and mentoring to turn young lives around.

I introduced him to one teenager I had been mentoring, from a particularly tough background, who had served time for armed robbery. This young man had energy and resourcefulness by the bucketload- but it had all been channelled in the wrong direction.

Fight for Peace gave him self-belief, better qualifications and a job opportunity he needed. He seized his second chance and ultimately, never looked back.

A staggering 80 percent of prolific adult offenders begin their life of crime as children.

For some, truancy led to theft. For others, vandalism to violence.

In the worst cases, a misspent youth leads to years of incarceration – at the taxpayer’s expense. Failing to change the behaviour of those at risk of becoming criminals leads to more crime, more victims and huge social costs.

Nearly £17billion a year is spent on police, hospitals, courts and jail sentences, because, too often, we intervene too late. And these costs are rising.

So, I am determined to take earlier preventative action, because we know that when it comes to crime an ounce of prevention goes a lot further than a pound of cure.
Schemes for young people, like Fight for Peace, are a transformative way to help them to channel their abilities in the right direction, rather than getting mixed up in crime.

This week I met inspiring youth offending staff at Blackpool family hub – a community centre offering families and children a range of activities and support.

I heard about young people putting their energy into sport including – again – in the boxing ring, instead of roaming around the town, in gangs, blighting neighbourhoods.

From Newham to Blackpool, these initiatives help young people to turn their lives around – and keep our streets safer.

So, today I am announcing over £300million of new funding to put rocket boosters under these preventative schemes. The investment will be spent on initiatives including sports clubs, music and drama that also then serve as a gateway to 1-to-1 mentoring and extra school tuition.

That combination of positive opportunities, improved skills and pastoral care will help around 20,000 additional children to get their lives back on track.

And we will specifically target those on the cusp of getting mixed up in the justice system – for instance those given a police caution for the first time – and turn their lives around before they get into more serious trouble. We know these interventions work.

In fact, we have driven down the number of young people entering the justice system by over 80 percent in the last decade.

So, the case for expansion is overwhelming – with multiple benefits. But we want to go further for several reasons.

First, every child we can reach and support to turn over a new leaf will mean creating fewer victims and safer streets.

Second, we can restore pride in neighbourhoods plagued with damaged property, vandalism and antisocial behaviour.

Finally, every £1 spent on early intervention can equate to £2 in savings for taxpayers who shouldn’t pay for the costs of crime.

Early intervention is part of a wider plan to fight crime – recruiting more police, longer prison sentences for dangerous offenders and greater support for victims – which is the best way to protect our communities from crime.