WASHINGTON — The bull Romeo stood in the middle of 2,000-acre pasture near Cheyenne, Wyo., suffering from foot rot. Even though she lacked a horse, Cynthia Lummis, as the ranch owner, was responsible for getting this moody and aggressive animal into a trailer and to the vet.

A bull is too powerful to be forced to do anything, but he can be persuaded. So Ms. Lummis approached Romeo on foot, talked to him very kindly and pulled the giant beast gently by the ear until he had boarded the trailer and was off to treatment.

A thing to note about Ms. Lummis during this 2010 encounter: She was a sitting member of the House of Representatives at the time. A decade later, she can boast of another feat: She is the only woman to have been newly elected to the Senate this year.

“There are 535 members of Congress — you think any of them moved cattle yesterday? Who else moved a bull?” Tucker Fagan, Ms. Lummis’s former chief of staff, marveled as he recounted the story. “And you did it just by being nice.”

Big victories for congressional Republicans in November’s elections have ushered in what some analysts are calling the year of the conservative woman. At least 36 Republican women will serve in the 117th Congress when it is gaveled in this January — with the number of Republican women in the House more than doubling. But Ms. Lummis is the only one to have won a Senate seat in this wave.

A self-described “libertarian-leaning Republican,” Ms. Lummis — whose last name rhymes with hummus — is the first woman to represent Wyoming in the Senate. She is also the first member of the ultraconservative House Freedom Caucus to win a seat in the chamber.

Despite her libertarian streak, Ms. Lummis holds some starkly right-wing views. In an interview days after the presidential race was called for President-elect Joseph R. Biden Jr., Ms. Lummis encouraged President Trump to keep pursuing his fictional claims about widespread fraud in the November election.

“He should absolutely keep down this path, because we have to know that our elections have integrity,” she said. “By all means, we have to get to the bottom of this.”

In a debate during her campaign, Ms. Lummis said she did not believe “racism is actually systemic” in America, saying instead that “pockets of racism” existed.

And her campaign website bragged about an A+ rating from the National Rifle Association.

“She’s going to be a conservative voice and she’s tenacious, as you would expect from someone who is elected from Wyoming,” says Senator John Barrasso, a Republican and the state’s senior senator, who serves on Senator Mitch McConnell’s leadership team.

Ms. Lummis, 66, is returning to Washington after having served four terms in the House. She decided not to seek a fifth after her husband, Alvin Wiederspahn, died in 2014. She said she needed to tend to the family’s ranch — a nearly 20,000-acre property where steer are branded with the phrase “4-Z.”

Her family, descended from German immigrants, has lived in Wyoming since before it was a state. In 1976, she was crowned Miss Frontier.

Ms. Lummis always had a strong interest in politics. As a senior at the University of Wyoming, she interned at the State Senate and “fell in love,” she says. At age 24 in 1978, she became the youngest member of the State Legislature in Wyoming history. From there, she obtained a law degree, was hired as the governor’s general counsel, became director of the Wyoming Office of State Lands and Investments, and was eventually elected state treasurer.

All the while, she worked on the family ranch, which buys and sells thousands of steer annually. 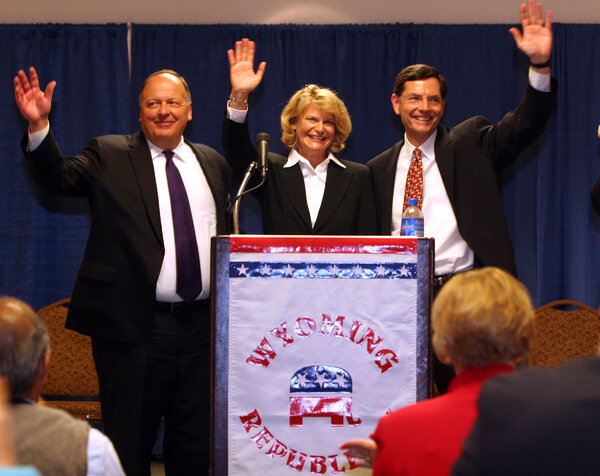 When Senator Michael B. Enzi announced last year that he was not planning to seek another term, Ms. Lummis put her daughter in charge of the ranch and decided to seek the seat — in large part, she said, because of mounting concern about the federal debt.

“The more we spent as a nation, the more terrified I got,” she said. “So when Senator Enzi decided not to run again, I was really energized.”

Ms. Lummis jumped into the race early and landed key endorsements, including from Mr. Barrasso, but there was speculation that Representative Liz Cheney, a daughter of former Vice President Dick Cheney, might run, making her the potential front-runner.

Senator Rand Paul, Republican of Kentucky and an ally of Ms. Lummis whom she had supported for president, began contacting the news media in Wyoming to champion her, working to nudge Ms. Cheney out of the race.

Ms. Lummis “represents a less-interventionist foreign policy and a small-government, less-regulation, lower-tax conservative wing of the party,” Mr. Paul, who has feuded with both Cheneys over considerable differences on national security, said recently.

Mr. Paul said he became involved in very few House and Senate races this cycle, but believed Ms. Lummis would be among the few in his party who would join him in the Senate in voting to end the war in Afghanistan.

Ms. Cheney opted not to run, sparing Ms. Lummis what Mr. Paul predicted would have been a bitter battle.

“Libertarian-leaning folks around the country were going to go all-in for Cynthia, because they saw Liz Cheney as the antithesis of everything we believe in,” he said.

Ms. Lummis lamented what she said is the Republican Party’s shift from libertarianism, but said she would try to push her colleagues in that direction.

“My brand of libertarian-leaning republicanism is not the emergent” wing of the party, she said. “Fiscal restraint has not been in vogue.”

Still, she said she had no plans to emulate the disruptive tactics for which Mr. Paul has become famous in the face of costly funding measures — or that Freedom Caucus members deployed against John Boehner, Republican of Ohio, when he was speaker.

“I’ve been on the phone with Mitch McConnell. I’ve told him I’m going to work him over behind the scenes on spending,” Ms. Lummis said. “But when I get to the floor, I’m going to be team player.”

During her campaign, Ms. Lummis proposed “across-the-board cuts” to federal agencies to reduce spending, and in the interview, she said she would push for a smaller pandemic stimulus deal if Congress had not yet acted by the time she joined the Senate early next year. But she noted that with the tight partisan margins in Congress, she may not always have the flexibility to oppose spending measures she considers unacceptable because Republican leaders will not be able to spare any votes.

Ms. Lummis also said she planned to be an advocate for cryptocurrencies, specifically Bitcoin, in which she is an investor. Wyoming has taken a lead nationally in crypto banking, she said.

“Wyoming paves the way for this country to look to Bitcoin as a store of value,” Ms. Lummis said.

Theodore Roosevelt IV, a conservationist and investment banker who served with Ms. Lummis on a board at the University of Wyoming, said he had been impressed with her financial savvy when, as state treasurer, she enhanced the state’s returns by shifting its investment strategy toward equities.

Mr. Roosevelt, a great-grandson of President Theodore Roosevelt, also recalled how during a cocktail party in Washington years ago, Ms. Lummis had a mechanical bull placed on the lawn. She outdid other guests, including himself, in riding it, he said.

Mr. Barrasso, who served with Mr. Enzi and Ms. Lummis while she was in the House, said the two senators both saw Ms. Lummis, the junior lawmaker on the team, as its most fearless member.

“We would always use a Western metaphor that Mike was the stagecoach driver for Wyoming and I was riding shotgun,” he said. “Cynthia was on her own horse, way out in front of us, with her six-shooter drawn and ready to fight anybody who’s going to take on Wyoming.”