The UK’s foreign aid spending target could temporarily be cut in order to help pay for the coronavirus crisis, it has emerged.

Chancellor Rishi Sunak is reported to be pushing for spending on foreign aid to be reduced from 0.7% to 0.5% of gross national income, as he prepares to deliver a spending review next week.

According to The Times, Mr Sunak has eyed the move as a way of saving billions of pounds for the public finances after the huge outlay to deal with the COVID-19 pandemic. 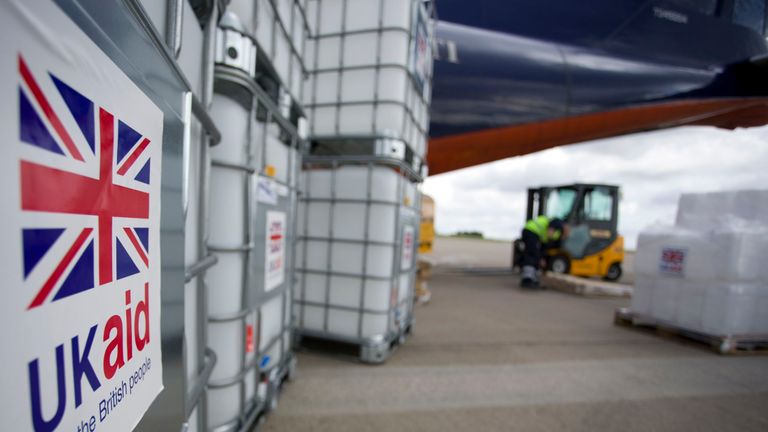 The UK is committed in law to spending 0.7% of gross national income on foreign aid every year, under legislation passed during former prime minister David Cameron’s time in office.

However, the government is able to cite three reasons for not having met the yearly target, although it must say how it will reach the target in the following year.

Those reasons are any substantial change in gross national income; the impact of meeting the target on taxation, public spending or borrowing; and circumstances arising outside the UK.

A Whitehall spending watchdog has already put the cost of the coronavirus crisis at £210bn for the first six months of the pandemic.

On Monday, Boris Johnson‘s official spokesman was reluctant to commit specifically to the 0.7% target, but said the prime minister was “committed to helping the world’s poorest people” and wanted “value for money for the UK taxpayer”.

However, as recently as September, Foreign Secretary Dominic Raab highlighted how the 0.7% target was a Conservative Party manifesto commitment and is enshrined in law.

The Times reported Mr Johnson wanted any cut to foreign aid spending to be time-limited, with a return to the 0.7% total by 2022.

The prime minister has previously refused to rule out rewriting foreign aid legislation as a means of ensuring money is “better spent”, while he this year merged the international development department – which was in charge of spending foreign aid – with the Foreign Office.

The Treasury said it did not comment on speculation ahead of upcoming fiscal events.

Spending on foreign aid was set to be £15.8bn this year, but Mr Raab has already announced that figure would shrink due to the contraction in the UK economy from the coronavirus crisis.

Brexit fishing showdown: Frost orders France to ‘back off’ in crisis talks on Jersey row