Home » Politics » Coronavirus: Breaking self-isolation to be made illegal in bid to tackle second spike

People who may have coronavirus will be required to self-isolate by law – with those who refuse facing fines of up to £10,000 in England.

Ministers are toughening up their stance by making the current guidance a legal requirement in a bid to try and prevent a second spike of COVID-19 ballooning across the UK and a potential second national lockdown.

Just 20% of those reporting symptoms in England fully self-isolate at home for the required two weeks, the government’s scientific advisers known as SAGE found at the end of August.

Live coverage of the latest coronavirus news and updates 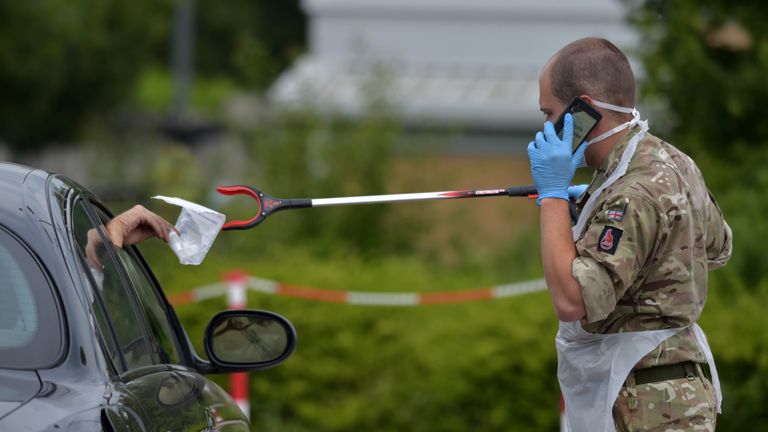 So Prime Minister Boris Johnson is changing the law from Monday 28 September to force anyone who gets a positive test or is contacted by the Test and Trace system and told they may have the virus to isolate.

Fines for breaches will start at £1,000 – but could rise to £10,000 for repeat offences and for the most egregious exceptions.

The penalties will also be able to dished out to those preventing others from self-isolating – such as bosses who threaten staff who cannot go to work because they are isolating with redundancy.

At the same time, a £500 lump sum is being offered to those who need to isolate and will lose money as a result of not working, are on benefits and cannot do their job from home.

The payments system may not be ready until 12 October, but the government is promising anyone eligible who has to isolate earlier will get backdated support.

It will be paid on top of statutory sick pay or any other benefit.

To make sure people who should be isolating are, Test and Trace call handlers will apparently make “regular contact” and report anyone who is failing to the local council and police.

Mr Johnson said the “best way we can fight this virus” is by “everyone following the rules and self-isolating if they’re at risk of passing on coronavirus”.

He added: “We need to do all we can to control the spread of this virus, to prevent the most vulnerable people from becoming infected, and to protect the NHS and save lives.”

Anneliese Dodds, Labour’s shadow chancellor, said the party had called “time and time again” for people who need to isolate to be given “proper financial support”.

“We welcome this belated introduction of extra support, but it shouldn’t have taken months for the penny to finally drop that people on low incomes needed more help,” she added.

“And with only a fraction of workers eligible for this payment, government must work urgently to fill any gaps.”

It follows the prime minister’s warning a second wave of COVID-19 is “inevitable” and already “coming in”.

The number of cases reported on Saturday was 4,422 – the highest daily rise in infections in over four months for the second day in a row.

Opposition politicians have said the government urgently needs to the address the issue of coronavirus tests being unavailable in hotspots, or people being told to travel hundreds of miles to get one.

Health Secretary Matt Hancock has admitted it may take weeks to solve.

It follows testing boss Baroness Dido Harding claiming no-one could have predicted the big increase in demand for tests following the full-reopening of most schools.

Govt extends Jobs Support Scheme by up to 7 months; sectors to get 10-50% tiered wage subsidies